During the months leading up to June 6th, 1944, D-Day, the men of the 9th Infantry Division resided in the pretty towns and countrysides of England. Here is an impression of how some of the Old Reliables experienced their stay there. 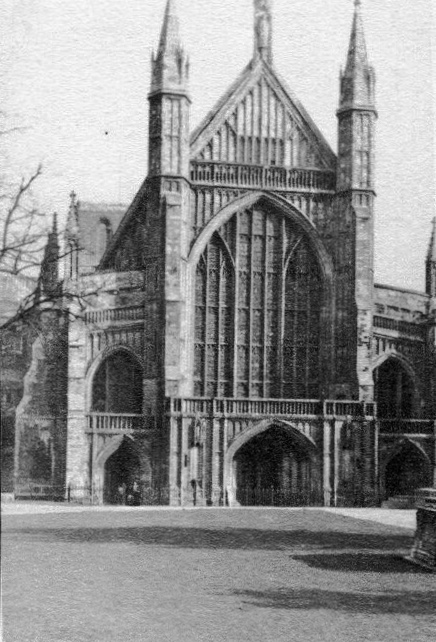 From November 27th, 1943, men of the 9th Infantry Division started to arrive in England. 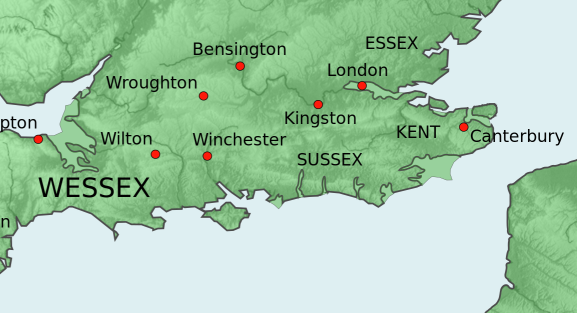 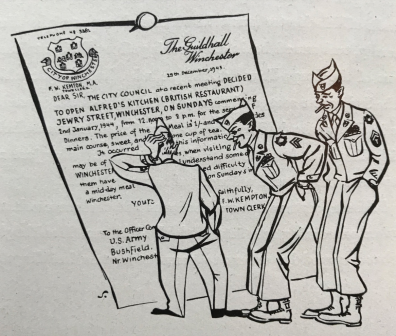 For all the men, an information course was instituted to teach basic good manners to those who’d been in the woods too long. The course was followed by an examination. For those who passed, daily passes were issued, allowing the men to visit places such as Winchester and London. The 9th Infantry Division was very fortunate in its jumping-off place, for Winchester was “Old England” through and through. Even the most casual and literal-minded visitor were impressed by centuries of history created by Winchester Castle, Cathedral and College. There were also the newly opened Red Cross Clubs, USO shows, dances, movies, boxing, newspapers in English each day, the Stars and Stripes, and the BBC radio station. 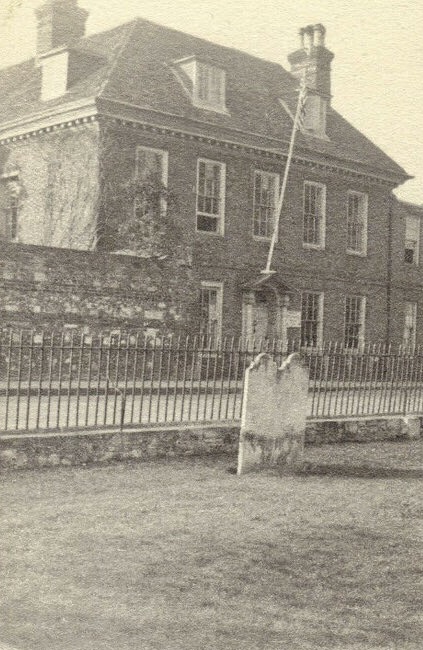 The sites chosen for the Ninth may not have been located in the largest cities, but they belonged to a section which could boast of centuries of tradition, and provided a supply of sights to see. It was at the historic Winchester, England where the men of the Ninth found a second home. The ancients capital of England had been host to Americans during the first World War as well. At that time, thousands of Yanks had been stationed on the huge ridge beyond the city. Now in 1943, battle hardened veterans of the North-African and Sicily campaign became part of the 1200 year old community. At places like the Winchester Barracks, West Downs School, Barton Stacey, Alresford, Tichborne, Andover and later Boscombe and Bournemouth, the men of the Ninth had seven months of unforgettable friendship. It was a welcoming time after the battles they fought, and now, to be in a land where English could be spoken and understood, they men all felt at home and often populated the many small pubs of these villages.

Of all places in England, it was Winchester that the men found most appealing. It was here where William the Conqueror built his palace atop its high street after the Battle of Hastings. Egbert, the first king of England, reigned and was buried within the city walls. Winchester Cathedral, the longest Gothic church in Europe, was the Westminster Abbey of ancient England and early Parliaments were held in Winchester Castle, the famous structure built by the invading Normans that housed the Round Table of legendary King Arthur’s reign.

Many Ninth men strolled around on the streets, passing the King Alfred statue as they admired the beauty of the city. 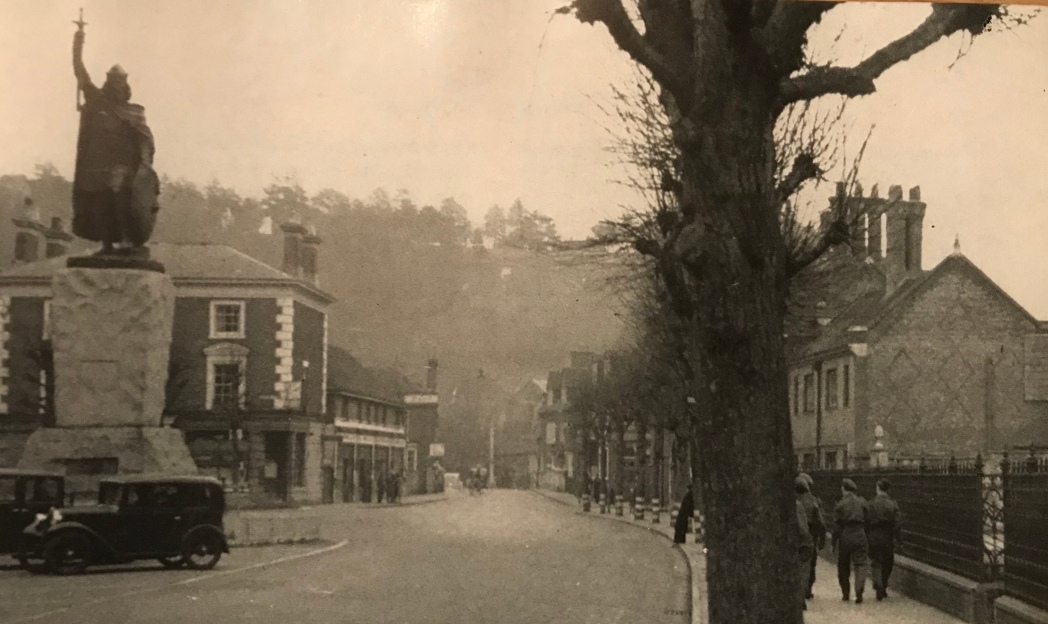 Sergeant Joseph Bergin, F Company, 47th Infantry Regiment
Recollection of walking around in the city and visiting the Cathedral. 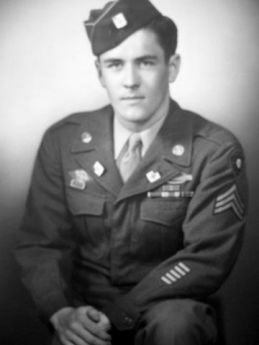 Joseph Bergin from Winthrop, a suburb in Boston, Massachusetts entered service in 1942. He participated in the Sicily campaign and arrived in Alresford in November 1943. From here he would often visit Winchester to visit the pubs and watch movies. He also visited Winchester Cathedral a few times.

“I have fond memories of my visits to Winchester. The people there were very friendly. I was so amazed by seeing the cathedral there. It didn’t look anything like a church back home. It breathed history. I attended a couple of masses in the cathedral as well. It was so impressive to see the large buttresses inside. I kept looking up during mass and admired the interior.

I would also wonder through the streets, and have a look at the sights and do some shopping. I remember they handed out a city tour leaflet as well, and I think I visited nearly all of those sights on there”. 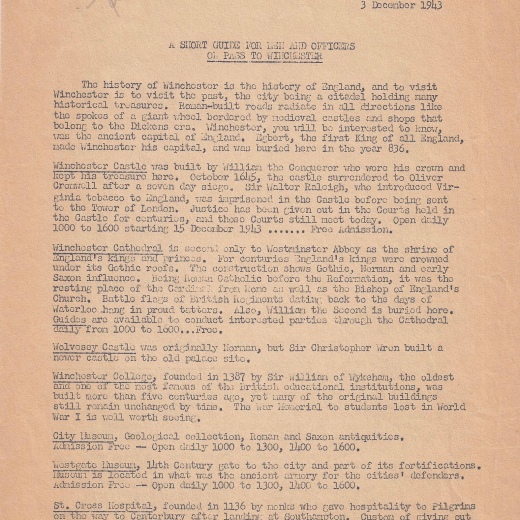 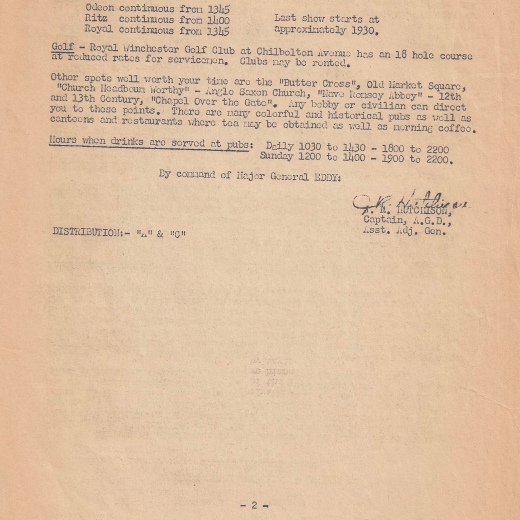 Winchester Tour leaflet of December 3rd 1943 part 2
There were more men who had good memories of Winchester. 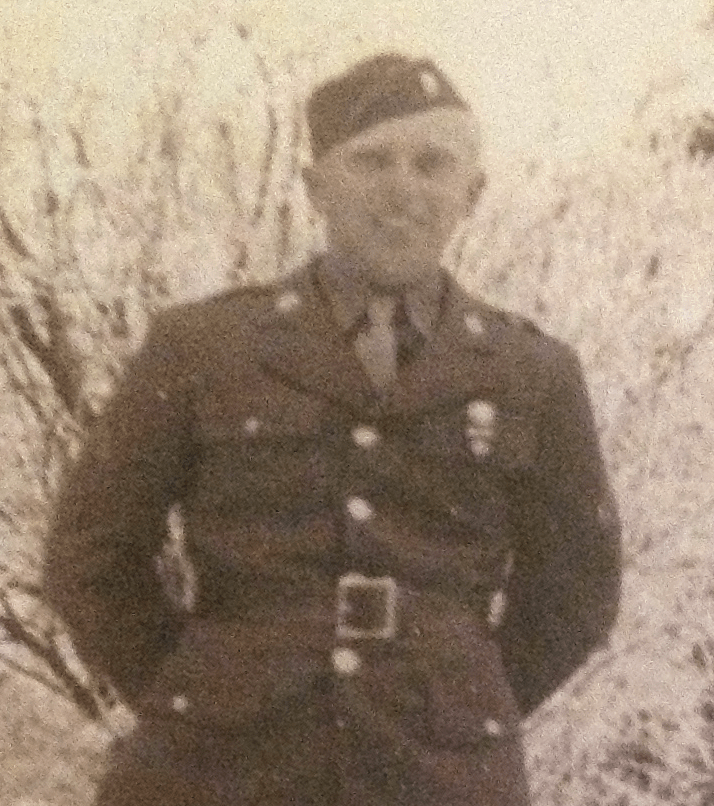 Sergeant Lloyd Stegeman, Tank Commander in C Company of the 899th Tank Destroyer Battalion joined the U.S. Army on March 22, 1942. This unit was attached to the 9th Infantry Division, and was also stationed near Winchester during the months before D-Day. Sergeant Stegeman attended mass at Winchester cathedral as well. “It was a very moving experience. We were handed out a neat booklet for the Cathedral Mass that I kept all these years”. 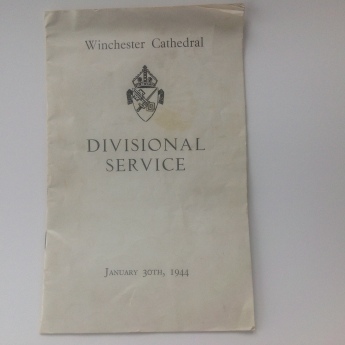 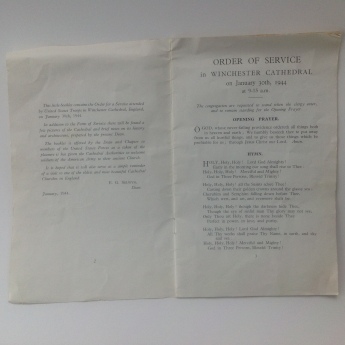 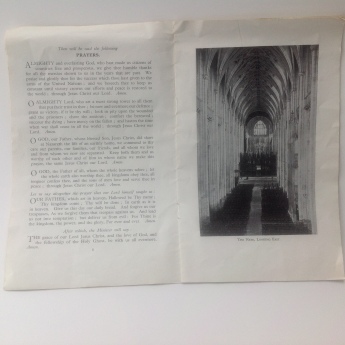 For many men of the 9th Infantry Division, memories of England included those nights of rushing in before bed check, trams (or also known as trolleys), or the nightly queue for fish and chips, eaten from a newspaper wrapper and doused freely with vinegar and salt. There were kids running around, asking the GIs for chewing gum, something they would distribute to the local children who in turn smiled and thanked the men. 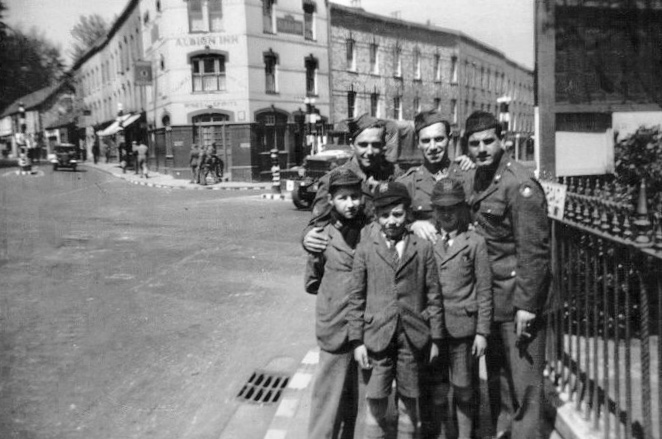 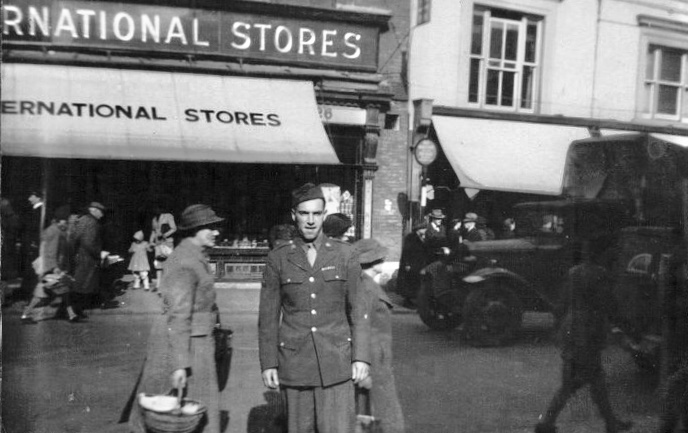 The Sundays were quiet peaceful. People such as the Mayor of Winchester Lt. General Griffiths, the Bishop of Winchester, the Dean of Winchester Cathedral, Alderman Sankey, were now considered a group of friends of the 9th Infantry Division men. 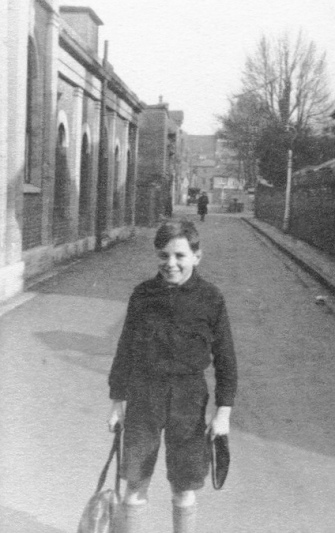 But for all its quiet, ancient beauty, Winchester was nothing more than a springboard from which the 9th Infantry Division could leap into the final European phases of the world conflict.

Toward the end of December, the 2nd Battalion of the 60th Infantry Regiment officially was given a Distinguished Unit Citation during a special ceremony held at the large quadrangle at Winchester Barracks. General Bradley, now the Army commander, presented the award. General Bernard Montgomery addressed the troops on a rainy afternoon Jan. 19, 1944, at the 60th Infantry Regimental area in Winchester Barracks.

As the mild English winter melted into spring, the luxury of passes, furloughs and weekends wore away to reveal more and more clearly the grim, steel framework of ominous military preparation. 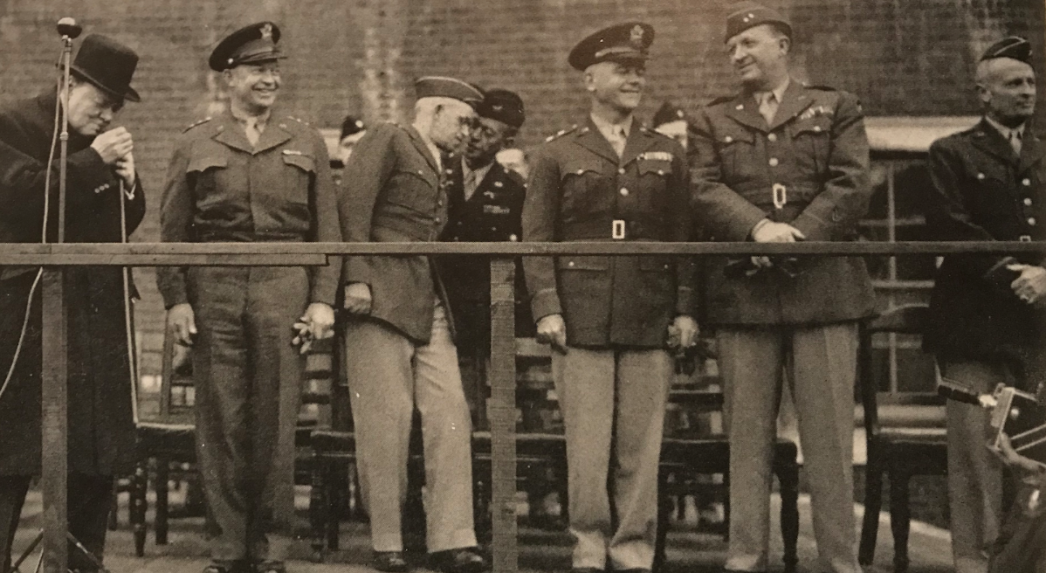 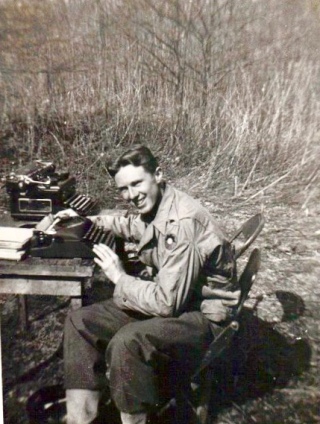 Chief Warrant Officer Frank Lovell, 60th Field Artillery Battalion, 9th Infantry Division. Frank Lovell got drafted in 1940, and participated in all Battle Campaigns. From the early days of the war, he kept a personal diary, and took many pictures. In one of his diary entries he writes about Winchester as well.

December 4, 1943 – Camp A, Barton-Stacey, England. Europe
“I got up for breakfast this morning for a change. I went to division with Ransdell and Captain January, which is at Winchester. it was cold. We stopped in Winchester and bought some brooms and hangers at a hardware store. It was nice to see store windows and see them full of things and Christmas decorations. And great to see and hear people who could speak English. It was nice to see the sights, and there are some nice looking girls around”. 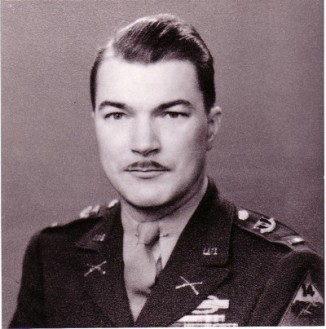 Joseph Youorski, 60th Infantry Regiment.
Joseph Youorski from New York arrived in England during the months before D-Day. He wrote about his wartime experiences and mentions the city of Winchester in several occasions.

“The people of Winchester were nice to us. Many of our people were invited into their homes. Important people from Winchester were often guests, and for these, the 60th Infantry Regiment would pass in review-marching to the music of the Ninth Division Band. The city officials treated our soldiers gently and we tried to return the kindness.

At Christmas 1943, the 60th Infantry Regiment planned a gigantic party for the children of Winchester. This party was to be funded by donations from the service men in the barracks. A local bank offered to take custody of these funds and to distribute the money to the people who would buy the gifts and cater the refreshments. The Christmas Party was a huge success. Hundreds of children showed up for the event. There were cookies, candies, light snacks and small gifts for all of them. One of our boys acted as Santa Claus (this was actually 2nd Battalion Commander Michael B. Kauffman)  and there was a dressed up Spruce tree to provide atmosphere. It was a great children’s ball. The party was held right after noon chow, and was over by evening. Many of the lady soldiers next door had attended the children’s party, and helped us with the decorations, gift wrappings and other arrangements. After the children left, there was plenty of food left over. To keep it from going to waste, we had a party of our own. The place had an electric phonograph, like a big juke box, and dance band records came with it. Our party became a dance”.

About Winchester itself:
Just outside our front gate and to the left was a grand building. This was Winchester Castle, home of Parliament when Winchester was the capital of England. As it was said to hold King Arthur’s round table.

The Winchester Cathedral was a local shrine. It was the largest gothic church in the world. It was nearly 600 feet long – the length of two football fields. It was built in the 14th century. It was so big and there was so much of it, it was impossible to see it all at one time. I went to see the Cathedral often and every time I went, I saw something I had missed before. I was especially impressed with the massive buttresses. I looked on them as art, and not architecture.

In a nearby cemetery a gravestone drew a lot of visitors. It advised one and all “Drink strong or not at all”.

9th Infantry Division Memorial Plaque:
There is a plaque at the Guildhall, in the Mayor’s Parlour saying it was presented to the City Of Winchester by the men of the 9th Infantry Division United States Army, as a token of their appreciation for the most cordial hospitality extended to them during World War II. It must still be there today.

Onto Normandy and the liberation of Europe.
By April 2nd, with all leaves and furloughs cleared up, the training pace was accelerated by a field problem on Easter Sunday. On May 27 at 0630 the division was put on a six-hour alert status. The men knew the time was at hand. There had been GI movies, USO shows, PX supplies, the Red Cross tea wagon, signs in English, mild-and-bitter, pubs and dances, and the not-so surprising rediscovery that the guidebooks don’t tell the whole story.

The 9th Infantry Division began moving to marshalling areas on Saturday afternoon, June 3 and went to Hursley Camp in the Hampshire region as well. Men found sleep difficult the night of June 5, under the ceaseless drone of unseen planes. By two-thirty, when the first units were alerted, everybody knew.. The Invasion of the continent began in the early morning of June 6, 1944.

The 9th Infantry Division moved to Southampton the next day on the 7th, and started to hit the Normandy beaches on D plus 4, June 10th, 1944, as one of the two U.S. infantry divisions on the beachhead with previous combat experience, a fact fully appreciated by higher commanders and military observers.

The men were now reminiscing of Winchester, its Guildhall, King Alfred’s statue, visiting Winchester Cathedral, the little bridge beyond it which let up the hill, the mild and bitters, tea and scones, fish and chips and waiting for the double decker busses. Whatever crossed their minds, most of these thoughts about England were pleasant ones.