– The Battle for Normandy –

After training in England in 1944, the 9th Infantry Division was to prepare for something big.
Orders were vague, and the men trained for months. By April 2nd, with all leaves and furloughs cleared up, the training pace was accelerated by a field problem on Easter Sunday. On May 27th at 06:30 the Division was put on a six hour alert status. The men knew something was about to happen. There had been GI movies, USO shows, PX supplies, the Red Cross tea wagon, signs in English, mild-and-bitters, pubs and dances, and the not-so surprising rediscovery that the guidebooks don’t tell the whole story. The Ninth Division began moving to marshalling areas on Saturday afternoon on June 3rd, 1944. Men found sleep difficult during the night of June 5th, under the ceaseless drone of unseen planes. By 02:30, when the first units were alerted, everybody knew…

This was D-Day, the Normandy Invasion!

Because the 9th Infantry Division went through several battles before, they did not land on the beaches during D-Day when the invasion of the French continent began in the early morning of June 6th, 1944. The 9th Infantry hit the Normandy beach on D plus 4, on June 10th, as one of the two U.S. Infantry Divisions on the beachhead with previous combat experience, a fact fully appreciated by higher commanders and military observers.

Men of the 9th Infantry Division seek cover at the seawall on Utah beach in 1944. The wall is still there today.

Unloading of men and equipment had hardly been completed when the 39th Combat Team, the “Anything, Anywhere, Anytime — Bar Nothing!” boys of Colonel “Paddy” Flint, were attached to the 4th Infantry Division to clean up the east coast of the peninsula. Following capture of Quineville, which at that time constituted the farthest Allied advance to the north, the 39th returned to Division control, and the 9th was ready to write one of the most glorious chapters in its history. The attack was swift and perfectly executed. Each time the enemy dropped back, the 9th Division hit him again. Having driven across the Douve River, and although north and south flanks were exposed, the 47th and the 60th Infantry Regiments reached the east coast near St. Lo, D’Ourville and Barneville early on June 17th 1944.

The Cotentin Peninsula was cut, but the enemy made a desperate attempt to break out near St. Jacques de Nehou. Artillery and a terrific mortar concentration massacred this force. The 9th then turned north toward Cherbourg. The 39th Regiment went through Octeville while the 47th Regiment seized the western half of the town and the arsenal. Meanwhile the 60th Regiment was protecting the left flank and preparing for an attack up the cape. During this campaign the 9th Division captured Lieutenant General Karl Wilhelm von Schlieben and Rear Admiral Hennecke, senior enemy Army and Navy commanders of the Cherbourg area. They were immediately brought to the Division CP where ensued a bit of repartee which shortly became famous.

Robert Capa, Life magazine photographer, appeared at the Division commander’s tent to take pictures of the captured officers. But the Germans definitely had other notions. Von Schlieben was particularly difficult.  “I am tired of this picture taking,” he snapped.
Capa, who speaks German, sighed and lowered his camera momentarily. “I too, am tired General,” he pointed out, “I have to take pictures of so many captured German generals!” 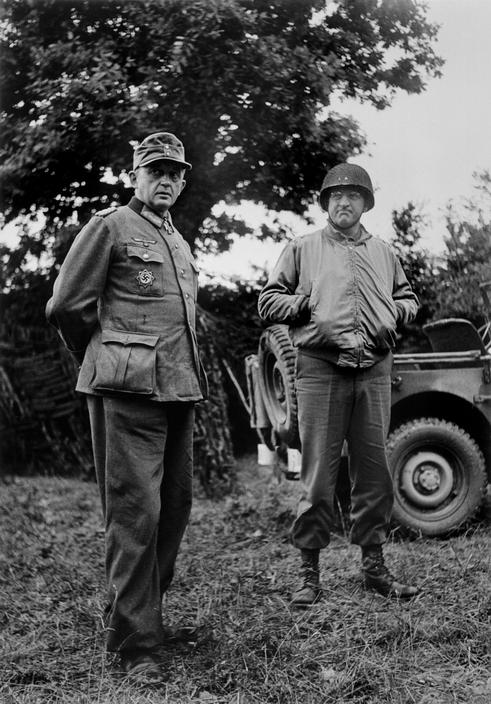 While other forces occupied Cherbourg, the 9th Division cleaned up the Cap de la Hague by July 1st, 1944. The 9th Infantry Division had accomplished the opening chapter of the invasion drama.