Over the years I have provided information about the World War 2 history of the 9th Infantry Division and its men who served in this Division to over 450 families and many veterans. I will add some testimonials about my research here. Feel free to contact me if you wish to have a testimonial included on this page. I appreciate it.
Thank you – Yuri Beckers.

Jack Dauner, veteran 60th Infantry Regiment, 9th Infantry Division
It was an honor to meet Jack Dauner for the first time in 2014 during the special “Meeting of Sons, daughters, grandchildren and veterans of the Huertgen Forest Battle” event. During this trip, I walked the woods with Jack and showed him his former positions. It was a very special moment. We now meet every year during this event. Jack is a special friend. 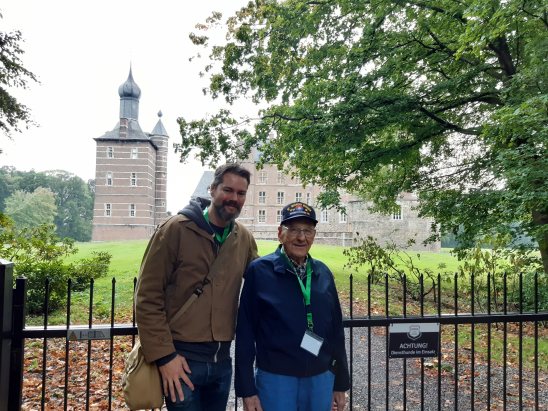 With veteran Paul Schumacher in front of Merode Castle, Germany.

Herbert Schader, one the 9th Infantry Division “Ritchie Boys”.
Herb was born in Austria, and he and his family moved to the US when the Nazi party was becoming bigger in the late 30s. Right after Pearl Harbour, he joined the Army and was send to Camp Ritchie. Here, among many other men that spoke a foreign language, they were trained to beccome a special team, the Counter Intelligence Corps. Herb got attached to the 9th Infantry Division, and mainly worked with the 47th Infantry Regiment and had the tasks to interrogate locals, and sometimes scout and recon villages at the frontline. He was interrogating German POWs as well. I am in touch with him and his family.

Herbert Schader and one of his sons, John.

Edward G. Miller, author of “A Dark and Bloody Ground”
During the 4th edition of the annual “Meeting of the sons, daughters and veterans of the Huertgen Forest Battle” weekend in Duren early October, I met the great author and historian Edward G. Miller. Mr. Miller wrote the best book available on the Battle in the Huertgen Forest, “A dark and bloody ground”. This book has been my main inspiration to start researching the 9th Infantry Division, and his book, info and sources have been a tremendous help in finding out more about the subject. It was great to finally meet him in person.

Edward G. Miller, author of A Dark and Bloody Ground and Yuri Beckers. 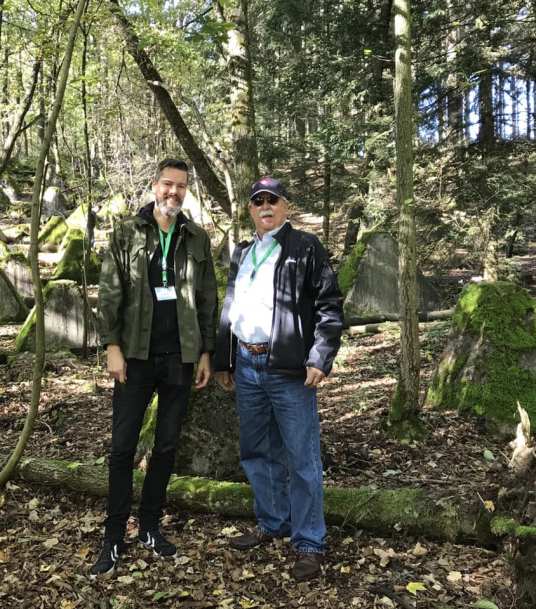 A veteran’s son
Mike Mooney donated some of his father’s items to the Vossenack Museum, and this was the first time he got to see the display. Very special.

Mike Mooney and Yuri Beckers standing next to the display of Mike’s father’s items, 1st Lt. Mooney at the museum in Vossenack.

Victory was beyond their grasp
It was a great pleasure to meet author Douglas E. Nash in person! I had read his excellent book “Victory was beyond their Grasp: With the 272nd Volks-Grenadier Division from the Huertgen Forest to the Heart of the Reich”, and he mentions the 9th Infantry Division in his book as well. He has great knowledge of the area and the actions there. 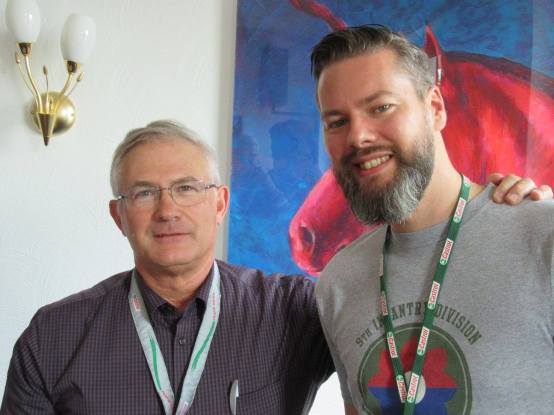 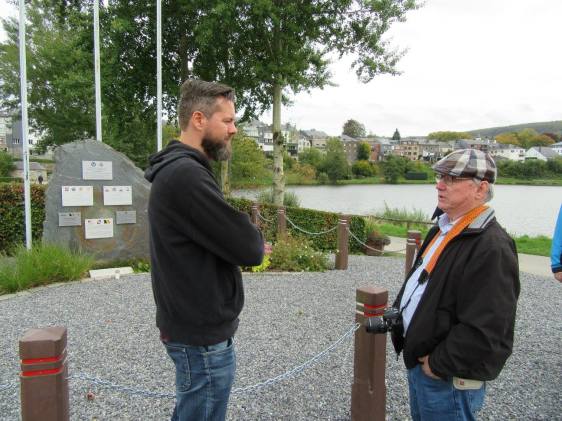 Author W. Blanchard and Yuri Beckers discussing the actions of the 746th Tank Battalion in support of the 9th Infantry Division during WWII.

Mayor and Historian
I am very honored to call Mr. Albert Trostorf my friend. My German friend is the Mayor of the pretty town of Merode, but also a great historian on the Huertgen Forest Battle. He has written several books about it, and often can be found in the area showing families and veterans the former battlefields. His support means the world to me. Albert is also the driving force behind the “Meeting of the sons, daughters and veterans of the Huertgen Forest Battle” weekends. This picture below was taken during the first event of these weekends, in 2015.

On the left: Harry Stumpf, one of the sons of Lt. Col. Robert Stumpf, who commanded 3rd Battalion, 39th Infantry Regiment of the 9th Infantry Division. An honor to now call Harry a friend!

“Your dedication and commitment to study the history of our great Division is admirable. Thank you for showing such an interest and for telling the story of what we have done in this great detail. You surely have my support for your projects”.
– Captain Charles Scheffel, 39th Infantry Regiment, 9th Infantry Division veteran.

“A distant pen pal, but close and dear friend who has written extensively about the activity of the Ninth Infantry Division, based on his remarkable research about combat activities in Belgium and Germany during World War 2. Our attachment evolved through Yuri’s interest in my eleven months and five campaigns in the ETO, 1944 AND 1945“.
– Tech 5 Howie Beach, Ninth Reconnaissance Troop, 9th Infantry Division veteran.

“Yuri must be one of the most authoritative researchers of the 9th Infantry Division’s actions in World War 2. Besides his extensive knowledge and passion for our combat history, he is a very kind person and has become a close friend to me over the years“.
– Sergeant Joseph Bergin, 47th Infantry Regiment, 9th Infantry Division veteran.

“Thank you so much for all you do to preserve the history of our Division. I am constantly amazed by your knowledge and you have provided me some great information about places that I have been to during the war, but never really knew much about! Keep up the great work“.
– John “Jack” Scully – Radio operator with Headquarters Battery of the 84th Field Artillery Battalion.

“Please let me tell you how impressed I am by your knowledge on the actions of the Ninth during the Hurtgen Forest battles. I am looking forward to exchange information with you and do some research projects together. Keep up the good work, we need young people like yourself to keep the memory of our Division alive“.
– Lt. Col. Henry “Red” Phillips, 47th Infantry Regiment, 9th Infantry Division veteran / Official 9th Infantry Division Historian.

“There are people that will go above and beyond to help out a total stranger. This shows the dedication of these individuals, the good side of the internet, and how close we are all connected. Yuri Beckers is certainly one of these people, along with other historians and authors. I have been the recipient of some of this help, and I can tell you, this would have been so much harder if not for these caring people and groups like this”.
– Dave Daniels – His great Uncle was Lee Bobbs of the 60th Infantry Regiment, KIA 13 March 1945.

“Modern society is generally moving away from the appreciation and value of history. Along with this, unfortunately fewer people passionately pursue an interest for research toward the preservation of individual stories of sacrifice regarding our veterans. Yuri Beckers’ unwavering, unselfish dedication to the families of veterans provides refreshing new hope in order that the experiences and hard ships of loved ones will be remembered in all perpetuity. Yuri has a wonderful loving young family and has already begun the process of passing on the importance of these ultimate sacrifices to his beautiful young daughter so that she too will also understand freedom comes with a heavy price. A generation apart, Yuri and I have connected on every issue, and every level of research which we share with equal passion. I am proud and honored to know him”.
– Michael Fraticelli – http://www.ww2survivorstories.com/

“Thank you for your great work what you are doing for the Greatest Generation and their children and grandchildren. It is always a pleasure to visit your Homepage Yuri!
Your friend, Albert”.
– Albert Trostorf, Mayor of Merode, Germany also author & WWII historian.

“My dad John Epperson came in as a replacement in K Company, 3rd Battalion of the 60th Infantry Regiment during World War 2. He never spoke of the war much but I took after him and went into the army as well. While researching my dad’s military service I ran across Yuri Beckers and the wonderful research he has both done and continues to do. He immediately put me on the correct path, providing me more details about some pictures I sent him. Yuri even took the time to physically take pictures of the daily status reports of the Regiment so I could get a feel for my dad’s daily combat life. I greatly appreciate Yuri’s dedication to our military history and his effort. Thank you so much for honoring the greatest generation”.
– Major Brian Epperson, former Company Commander, 101st Airborne Division.

“To anyone who reads this: Yuri has been most helpful in providing me some great information about my grandfather’s service with the 9th Infantry Division. I can recommend him if you need information about this often forgotten Division. The documentation and personal knowledge Yuri has shared with me have been distributed in my whole family, and means the world to us. From the way that Yuri writes, it is clear to us that he is very passionate about this Division and the men. Please make sure to spread the word about this website. Thank you Yuri, for all you have done to remember these men and this Division”.
– The Daniels family, related to Robert Daniels, 60th Infantry Regiment, 9th Infantry Division Veteran.

Authors have used my content and expertise as a historical advisor on the 9th Infantry Division’s WWII history for the following publications:

Raymond B. Farley
Through My Fathers Eyes: Recollections of War