9th Infantry Division – Then and Now

The 39th Infantry Regiment was involved in several battles in August 1944. After taking one of their biggest objectives, Chérencé-le-Roussel the Regiment moved further to La Gallerie. By now, the weather was warm and clear. On the 15th of August 1944, 2nd Battalion of the 39th Infantry Regiment jumped off to attack the vicinty of La Ferté-Macé. The next day on August 16th, a Regimental Command Post was established for the day at Lonlay-le-Tesson. The 2nd and 3rd Battalions moved through several of these towns to move forward into the direction of Lignou. The battalions remained in bivouac until the 22nd of August, 1944 when they began movement toward the Falaise gap.

On the 16th of August, a cameraman filmed the men of 2nd Battalion as they passed through the village of Le Grais and also captured the events at Lonlay-le-Tesson. The archival film footage can be viewed here:

I teamed up with Clément Fergeau who lives in France. He used the archival footage and pictures to locate the places in the towns of Le Grais and Lonlay-le-Tesson. All “Now” pictures are credited to Clément Fergeau.

Here is an overview of the events in Then & Now pictures. 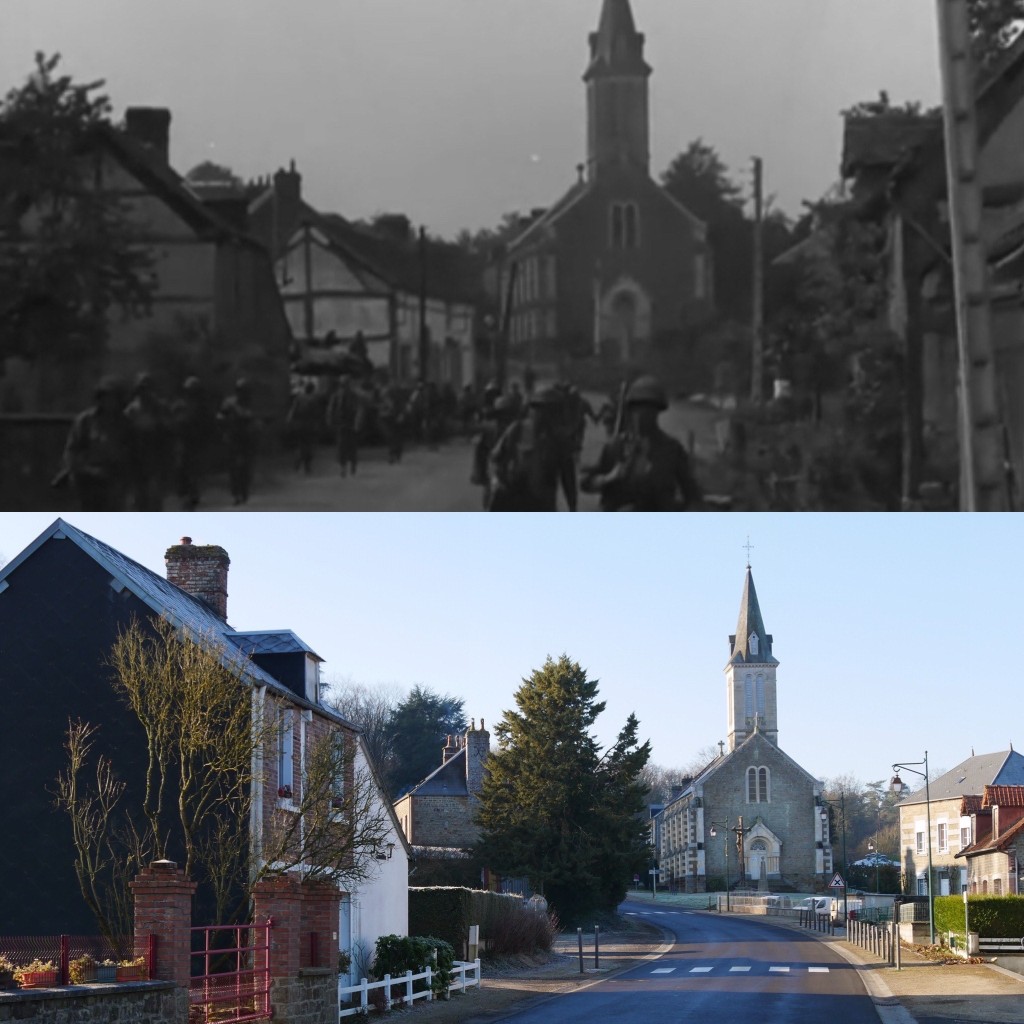 The men move through the village in order to find and capture any German opposition. In the meantime, connection is made with Headquarters in order to get further instructions.

2. The Junction of the Rue de Commerce and Rue des Écoliers, which leads toward Lonlay-le-Tesson.

Le Grais is only a small village, basically just one street and is cleared out fast.

3. The men continue on north on the Rue de Commerce to secure the village and capture any German occupants. 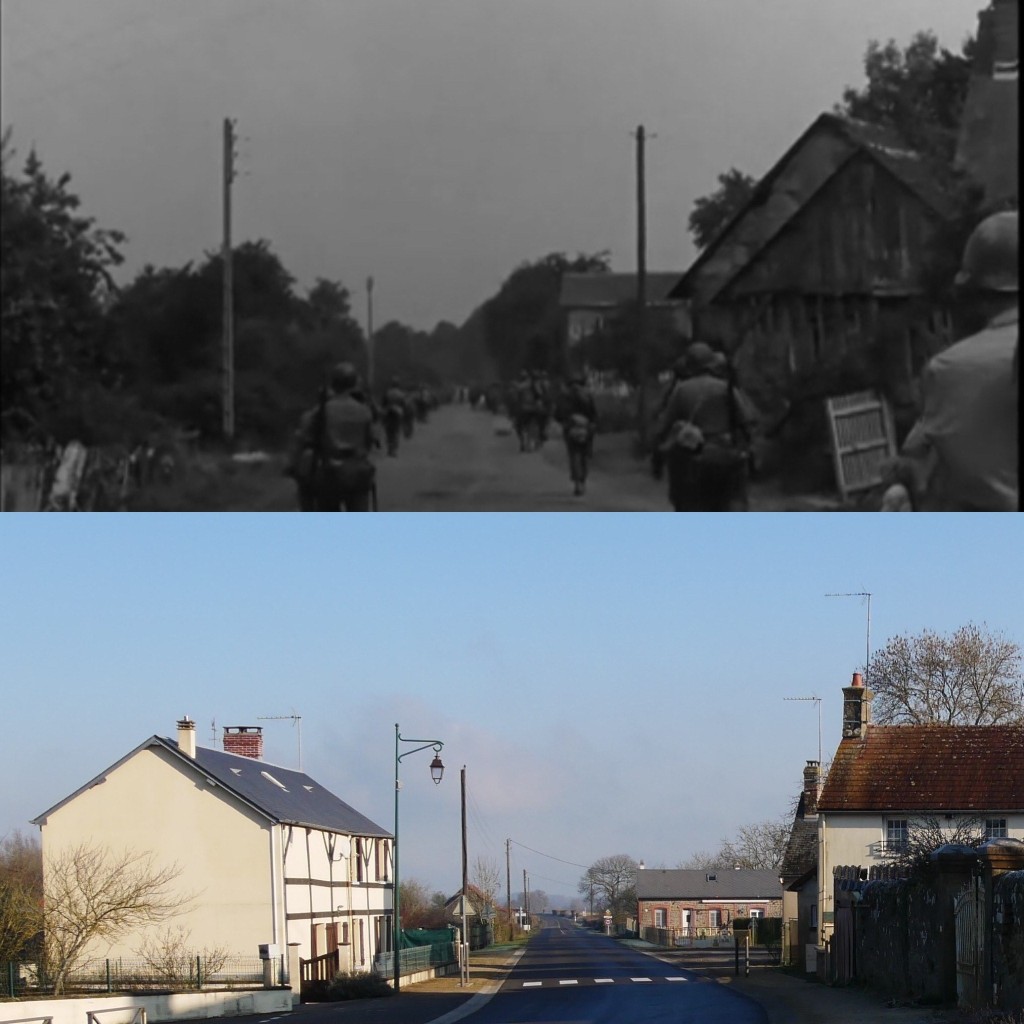 Soon the village is cleared, and the 2nd Battalion men return toward to the junction in front of the church. Orders now were to move to the next village of Lonlay-le-Tesson.

5. GIs start walking back on Rue de Commerce towards the junction at the church in order to move towards Lonlay-le-Tesson. 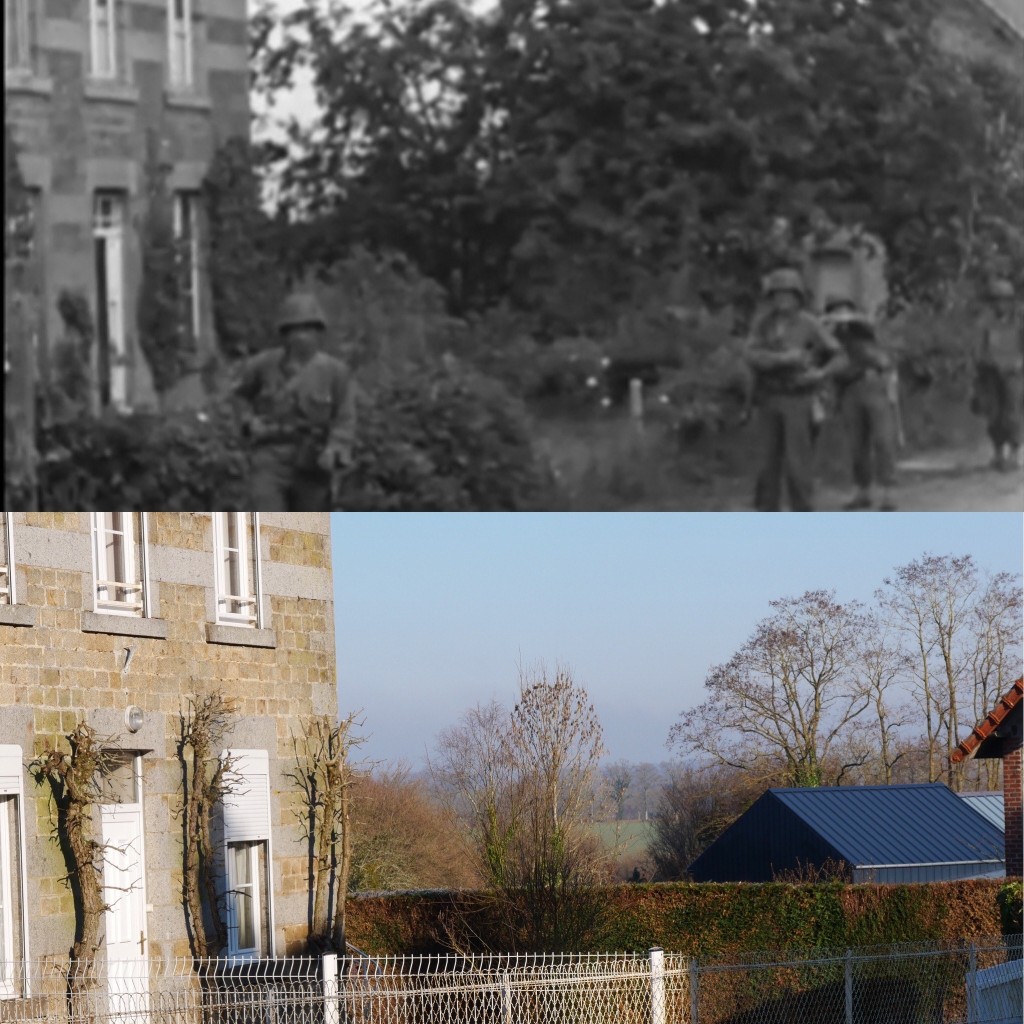 6. More GIs walking back on Rue de Commerce towards the junction at the church in order to move towards Lonlay-le-Tesson.

A few German soldiers were found and brought to the church junction. Please note the signpost, which after all these years, is still there.

7. At the church, several German prisoners are rounded up.

The new Regimental Command Post will be set up in the next village, Lonlay-le-Tesson, and the men walk down the current D856 road toward this village. The buidling in the back had been obscured by overgrowth for some years, but we found it to be visible again when we were there.

8. Men walking in a western direction on the Rue des Écoliers towards Lonlay-le-Tesson.

The pictures were taken at the following spots: 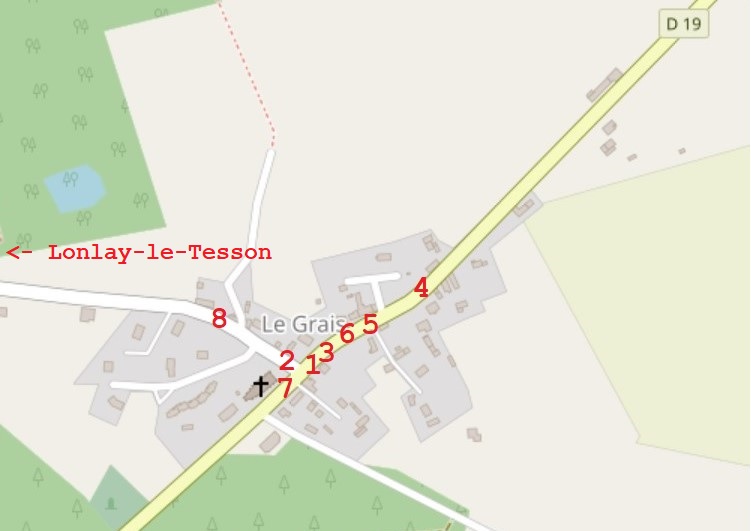 Map of Le Grais with corresponding numbers of the pictures placed on the locations where they have been taken.

In the next THEN & NOW series we will feature the events at Lonlay – le Tesson.