Anthony Sordill was born on July 24th 1911, in Montclair, Essex New Jersey. His parents were Leonard and Angela Sordill.
He would later enlist into the United States Army on the 3rd of December 1942 at Newwark, New Jersey and became a Medical Officer, making it to the rank of Major.

While serving with the 9th Medical Battalion as part of the 9th Infantry Division, Major Sordill’s bravery and self–sacrifice were witnessed by his unit and his extraordinary heroism and devotion to duty while under heavy fire earned him the Silver Star on 01 May 1943. The Silver Star is our country’s third highest decoration for Valor.

Anthony survived the war and returned home to New Jersey and passed away many years later on July 17th, 1997 in Cranford, Union, New Jersey.

Medals find their way back to family:

Last month, In September 2015, my friend Zachariah Fike of Purple Hearts Reunited (PHR) was contacted by Mr. Nick Del Prete of Toms River, NJ.  Now a retired Army Veteran, Mr. Del Prete often visits his local flea market. While rummaging through a box for sale, he discovered all of Major Sordill’s medals and dog tags. Knowing of their significance, he quickly rescued them and contacted PHR for assistance in locating the family. 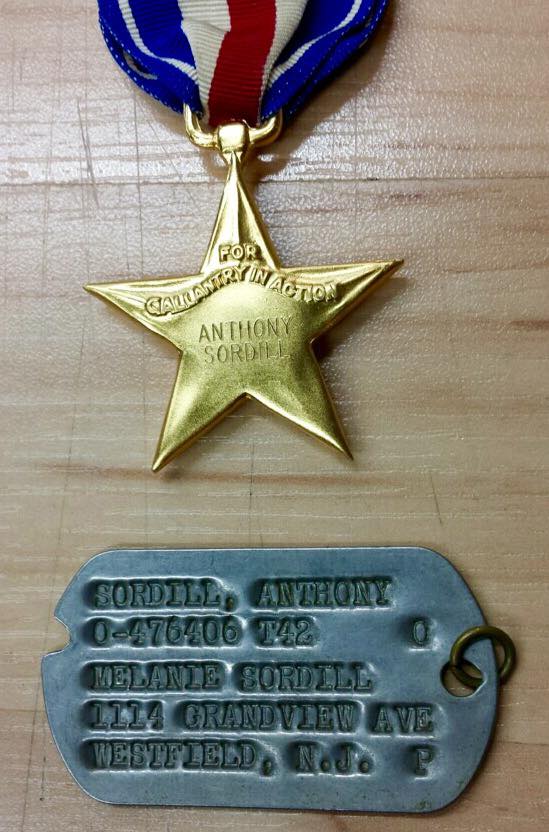 A video of the returning of the Major Sordill’s medals can be viewed here:

Major Sordill’s Granddaughter, Mrs. Cheryl Purro received the medals. She believes the medals were lost after Super Storm Sandy and is delighted to have them returned to her family.

We will never forget the dedication of Major Sordill to help wounded and dying men in battle.

A special thank you to Zachariah Fike of the great Purple Hearts Reunited who shared this amazing story with me.