Avery was a small town farm boy born on 23rd of October 1915. He worked as a truck driver in Lenox and was married to Alma (Johnston) Stuart. Together they had 3 small children, William aged 7, Robert aged 5, and Janice, his daughter that was born in June 1944. Sadly, Avery never met his daughter Janice as he was drafted into the US Army from Lenox, Iowa before she was born. Avery enlisted in October 1943.

Into the Hurtgen Forest Battle.

On 25 September 1944, Avery found himself in the middle of the Hurtgen Forest Battle. As part of M Company, 3rd Battalion of the 6th Infantry Regiment, he and his fellow men were given the mission of cutting southwest, in the front of the 1st battalion and seize the road junction of the L24 – 399 road.

It was originally planned that the 1st Battalion moved out in the attack, but it had suffered so heavily during the previous days that it could not made an advance. Meanwhile the enemy shelled the 3rd Battalion position with long range artillery from the east and Self-Propelled guns from the south. The thickness of the trees increased the number of air-bursts and likewise the number of casualties. The 3rd battalion consolidated its position by pulling back into essentially the same area as it had held the previous night.

The main threat were several pillboxes / bunkers in front of the 3rd Battalion. These had to be taken in order to advance any further. Right after the shelling, the enemy infantry attacked in large numbers, and before anything could be done they were close to the pillbox that had been set up earlier by the 60th Infantry Regiment as a temporary Command Post. A Tank Destroyer, which had been drawn up close to the position fired at point blank range at the enemy. The men of Company K, L and M had to fight hard to capture the pillboxes. It took them several days to make any advance. In addition, artillery was called down on the area to the east of the pillbox. It was now about dusk, and the enemy was slowly forced to withdraw. Additional casualties were inflicted however, when the artillery shelled the area through which the enemy had to retreat.

The next day, 26 September 1944,  the 3rd Battalion companies held their same positions in front of the lines of pillboxes until about 1200, when they tried moving to the southwest. 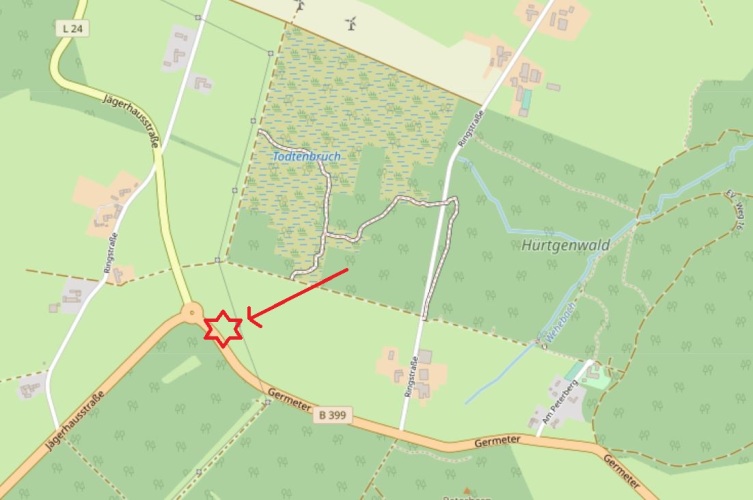 PFC. Avery Stuart’s movements to the southwest in order to take out the pillboxes to his rear. In this approximate location, he was wounded, and died of his wounds shortly after. 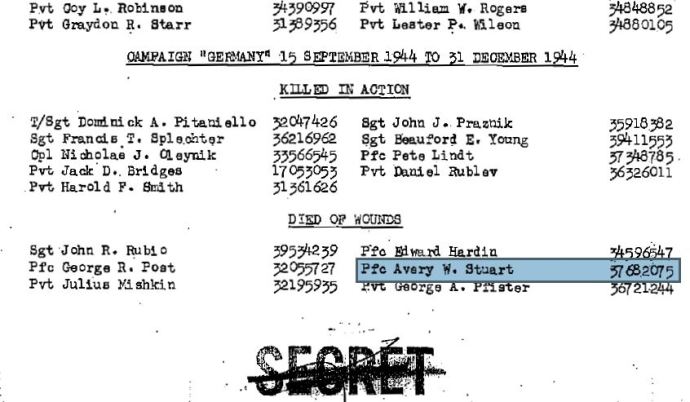 The casualty report that lists Avery as “Died of Wounds”.

Avery was first reported as Missing In Action, but a weeks later his wife Alma received another telegram, saying he was Killed In Action on 26th of  September 1944 in the European area.  Avery would turn 29 years old a month later.

While home on a short leave in May 1944, just a month before his daughter was born, Avery had a premonition that he would not come back. He told this to his mother, his wife Alma, and told his 7 year old son William that he would need “to be the big boy for the family”.

Alma could not believe that Avery was dead so she and Avery’s mother decided that whatever body the US Army had would be buried over there.  She wondered for years if Avery was still alive and possibly a POW because she was not allowed to view his body and did not receive his dog tags. A sad moment for Stuart’s mother as well. She had 4 sons serving in the war, and she had now lost one of her boys. 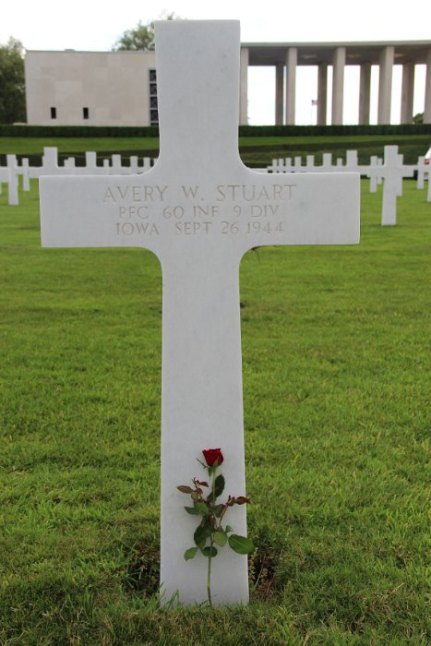 PFC. Avery W. Stuart is buried at the beautiful Henri-Chapelle Cemetery in Belgium, where he is resting between his brothers in arms.

His actions for our freedom will never be forgotten.