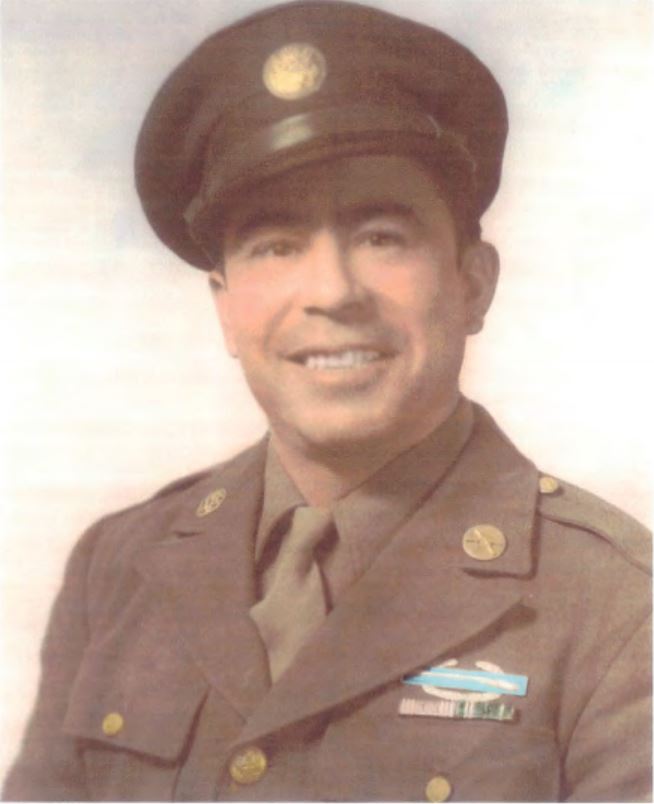 Frank was born on September 29th, 1911, enlisted on January 29th 1944, and left his home on August 14 that same year after saying goodbye to his children with an aching soul.

Frank N. Lujan crossed the English Channel on September 17th. When he arrived in Normandy, he saw hundreds of ships unloading thousands of pieces of equipment.  After disembarking he marched over the sand of the Normandy beaches, picked up a handful of sand, turned around and said to his comrades, “Viva la France!”.  This is how the war in Europe started for Frank.

On October 20th 1944 Frank entered Germany and was assigned to 4th Platoon, Company F, 47th Infantry Regiment of the 9th Infantry Division. Here Frank was positioned in the town of Schevenhutte, where he experienced his first combat during the Battle in the Huertgen Forest.

During his stay in the village area, Frank was first living in a house, and about a month later, he had to live in a foxhole. A nearby German sniper missed his head twice; the second shot was so close he felt the heat of the bullet zoom next to his right ear. The sniper’s next shot killed a comrade of Frank just a few yards away, who was shot square in the middle of the upper neck. The sniper was killed that dawn, but miraculously, Frank never got hit.

Frank saw many comrades losing their lives while fighting on the defense line. On November 16th, Frank was a witness to the heavy bombardments by American artillery and bombers, all part of the “Operation Queen” offensive.

After taking part in the attack to the nearby hill and town of Gressenich, Frank was taken away from the front-lines on November 30th, 1944, as reinforcements were brought in. After being pulled to the rear, he had his first hot meal for the first time in the 45 days of heavy fighting. After breakfast, Frank felt very sick in his stomach and threw up all of his breakfast, and continued vomiting for over an hour. All that came out was burnt gun powder, indicating he was in the thick of the action for a long time.

This marked the end of the Battle experiences for Frank. After spending a lot of time at various hospitals, he returned home again. Frank returned to his wife and children on February 13, 1945.

We will never forget this great man.