Private Frederick Allen Fonner as a student in the Army Specialized Training Program. He is also wearing the ASTP – patch here.

Frederick Allen Fonner was born on October 3rd, 1924 and grew up in the small, rural West Virginia town of Middlebourne. After completing high school in 1942, he attended West Virginia University for one year. In June 1943, he was drafted into the Army and was sent to Camp Joseph T. Robinson at North Little Rock in Arkansas to train at the Medical Replacement Training Center.

Fred completed the medical training program in August 1943 and was sent for additional training as part of the Army Specialized Training Program (ASTP) at the Carnegie Institute of Technology (now Carnegie Mellon University) in Pittsburgh, PA. ASTP trained soldier-scholars were to become engineers in service to the Army. The program was canceled in the spring of 1944 and most students were sent to Europe in preparation for D-Day.

However, Fred was sent to Camp Pickett in Virginia for additional weapons training. He spent time with heavy weapons and was certified on virtually all firearms used by the U.S. Army. Upon completion of this training in August of 1944, Fred was sent to Europe on the Ile de France en route to a replacement depot in France by way of England.

Into Battle.
Fred left the replacement depot in late September and joined Company G of the 39th Infantry Regiment on October 4th, 1944. This placed him right in the middle of the terrible battle in the Hurtgen Forest. Two days later, the Regiment started an attack in order to cut the main 399 road between Monschau and Duren and to take the town of Germeter. After serving with the 39th for only 3 days in the Hurtgen Forest, he received a serious wound in his leg cause by a tree burst. Fred was hospitalized until the middle of December in Fontainebleau, France.

The telegram sent to Fred’s parents after him being wounded during the attack in the Hurtgen Forest on October 7th, 1944.

Upon return to the 39th Infantry Regiment, Fred fought through the Battle of the Bulge, Bad Godesburg, crossed the Bridge at Remagen and fought for its bridgehead. He left active duty in March 1945 because his leg wound became infected and he was suffering from Battle Fatigue (PTSD). Before leaving to the United States, fred went to Bristol in England where he received treatment for Battle Fatique near the Tyntesfield Estate. 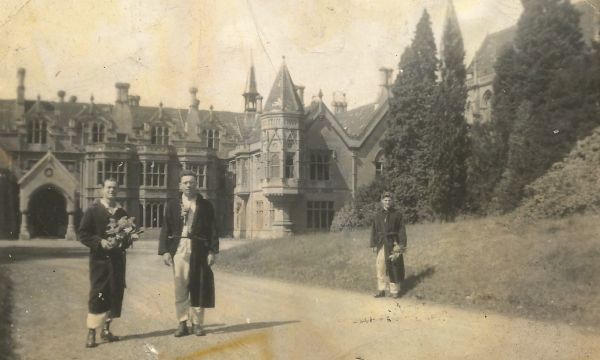 Fred (on the right) and friends at the Tyntesfield Estate near Bristol, UK. Here he received treatment for Battle Fatique.

After his discharge in September 1945, Fred retuned to finish his education at West Virginia University and to marry his sweetheart, Mary Anne Robison. With a degree in chemistry, he and his wife moved to New Martinsville, WV where they raised four sons and many grandchildren. 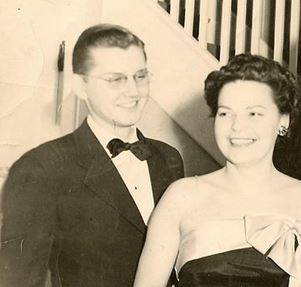 Fred and his wife Mary Anne after the war.

Fred passed away one day before his 89th birthday on October 2nd, 2013.

Today, Fred’s grandson Daniel is writing a book about Fred’s wartime service based on the stories of his Grandfather and a collection of over 550 letters sent between Fred, his wife Mary Anne, and other family members during the war.

Fred Fonner giving his grandson Daniel the Bible he carried throughout the war.

You can read more about Fred’s legacy and his time at the Carnegie Institute of Technology at:
http://culturalpolicyguy.blogspot.com/2014/07/world-war-ii-engineering-and-arts.html

I would like to thank Frederick’s Grandson Daniel for showing such an interest in his Grandfather’s World War 2 history and for sharing this story and pictures with me. We will never forget Private Frederick A. Fonner.