Fredrick Mauk was born on the 2nd of February, 1922.
He was drafted on 26 October 1942, and reported on 6 November, 1942. Frederick was called to active duty as an enlisted man on November 20th, 1942. He reported to Toledo and was sent to Camp Wheeler in Georgia for basic training. He completed 3 months of motor school while there. He went overseas on April 19th, 1943, to Tunisia, which took eleven days to get there by ship. He was assigned to the 9th Infantry Division, 60th Regiment, 2nd Battalion, Company E. He was one of five (out of ten) brothers who served. His youngest brother was four years old when Fred reported for duty.

Northern Africa and Sicily
Fred Mauk was injured on July 7, 1943 in Sicily, wounded in the left thigh fighting near Troina. He was hospitalized from a thigh wound in England. His brother Harold visited him in September 1943. On August 11, 1943 – Fred was awarded the Purple Heart for injury in Sicily.

France
On June 6, 1944, Fred’s unit loaded the boats, a fifty-ship fleet out of Dorchester, England to Utah Beach. They went in on June 11, 1944, D-Day plus five due to a storm and the fact they had military experience in Tunisia and Sicily (saved for last). We believe he was a B.A.R. (Browning Automatic Rifle) man. On June 16, 1944, the 60th Regiment was ordered to advance to the Douve River. Under Captain Sprindus, Company E lead the way. Surrounded by Germans on three sides, while running out of ammunition, Company E held out there while the rest of the 9th Division caught up. His unit received a Presidential Unit Citation for holding the bridgehead, gaining a foothold across the river. The entire time, it took intense mortar, small arms and artillery fire. It was a major factor in cutting the peninsula. 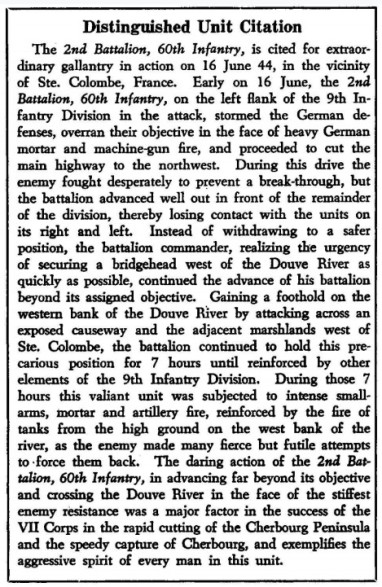 On July 13th, the Allied forces were near St. Lo, France ready to make their breakout near Bois du Hommet. It was a fight that took 8 days to fall. Fredrick Mauk was injured with a head wound, receiving shrapnel behind his ear.

Belgium
Fred Mauk was hospitalized until September 9, 1944. Days before, his company crossed the Meuse River into Germany. Most of Company E (Easy company) was killed or captured in the area of Hastierre-Heer, Belgium, more precise, at Mesnil St. Blaise.  Men that he fought with for 18 months. There is a small monument at the site where his unit was taken, aided by the townspeople to get across the river. 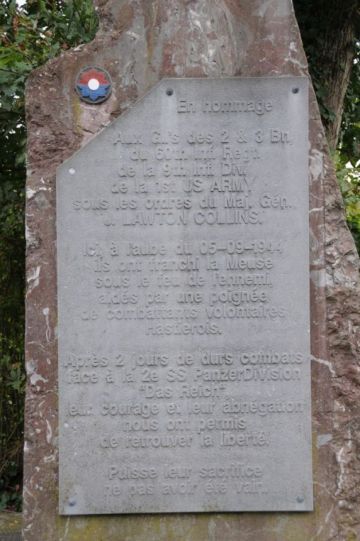 Germany – The Hurtgen Forest
Fred was then stationed in Monschau, Germany until his unit could be resupplied with men and equipment. He served about three months in this area, possibly becoming a Jeep driver and truck driver after his two injuries. His unit fought in Hofen, pushing the Germans behind the Siegfried Line. The Hurtgen forest was one of the bloodiest battles in World War II. We can only imagine what his morale was at the time. His Army buddies were gone, this was approaching his third Christmas overseas, and it was cold. He talked about not having the coats they needed.

On September 27, 1944, he had a twisted right ankle and was hospitalized. On October 2, 1944, a letter was sent to his mother that he was returned to duty. The hospital notes that day say that he also had acute tonsillitis and had started to receive “hot saliva” treatment. He returned to duty on October 9, 1944.

In October 1944 Fred’s unit lay mines, participated in heavy combat, and “destroyed pillbox by pillbox.” They tried to seize the Schmidt-Steckenborn ridgeline, but failed to do so due to heavy counter attacks by the enemy. The 60th Infantry Regiment was hit brutually hard, and had to be taken off the front line late October 1944 in order to rest and rebuild strength. They had R&R at nearby Camp Elsenborn where they trained in the mornings and recreated in the afternoon. The 60th Infantry received awards and decorations while at camp.

In December 1944 it was the coldest winter in decades and the Battle of the Bulge begins. For Christmas, he ate Spam, according to After Action reports.

1945
January and February 1945 had a terrible blizzard and snowfall was abundant throughout January. They fought near Dreiborn and took the Dreiborn Castle, fighting German officers in a room to room battle. It took twelve hours to take it. They prevented the Germans from blowing up the Schwammenauel Dam, which would have flooded the downriver and surrounding area. The Germans did blow the floodgates and the 60th  Infantry patrolled the area to prevent further damage.

On March 7th, Fred re-injured his ankle and had another throat infection. He was hospitalized for two weeks. His story was published in the Lima News Newspaper on the 25th of March, 1945.

The rest of March, the 60th Infantry drove across Germany, capturing ten towns in one day. Companies E and F captured four of the ten captured. On March 28th, the 60th Infantry traveled 25 miles and the joke was that the only resistance was the friendly armored traffic they encountered.

In April 1945, fighting increased. There was a pocket of “fighter dyed-in-the-wool Nazi types” in the area of Thale and Friedricksbrunn. Aircraft guns were aimed at them, twelve guns in all. They won and took over eight hospitals as well. At the end of April, many German officers were surrendering to them, knowing that they would face the Russians if they continued to fight.

On May 1st, 1945, Hitler committed suicide and on May 7th, Germany surrendered. Fred’s ASR score, the Advanced Service Rating, a score system designed to return troops back to the U.S. based on the length of time served, family status and honors received in battle,  was 100, but he transferred to another unit to transport military equipment back to the US before he left.

July 19, Fred was sent to La Havre, France and as part of the 962nd Engineer Maintenance Company went on leave.

July 23 – 25, 1945, Fred was sent to Antwerp, Belgium to deliver vehicles and took two days leave. He later shared stories with his family about women kissing him in the street there.

On September 13, 1945, Fred was honorably discharged at Indiantown Gap, Pennsylvania.

Fredrick Mauk made a total of $9948.33 for his service to his country, serving overseas 2 years and 5 months (not including basic training which was four months). As reported on disability papers, he lists work done in service as a B.A.R. man (Browning Automatic Rifle weighed 60 pounds) – machine gunner, mortar, Jeep driver and truck driver.

Fredrick Mauk received the Purple Heart for the injury while in Sicily. He also received the Combat Infantry Badge – the at-a-boy given to infantrymen only because they were taking such losses. He received the European-African-Middle Eastern Campaign Ribbon, two Presidential Unit Citations, and Good Conduct Ribbons and is eligible for a WWII Victory Medal. 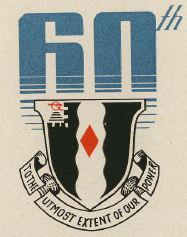 Fred married Mary J. Campbell on December 31, 1955 – a full ten years after he returned home.
They had five children – who all wish they had asked more about his war experience.

Fred died May 21st, 1982, never talking about his experience in the war except for a few stories here and there.
His last resting peace is next to his wife Mary at the Blue Lick Cemetery, Lima, Allen County in Ohio. 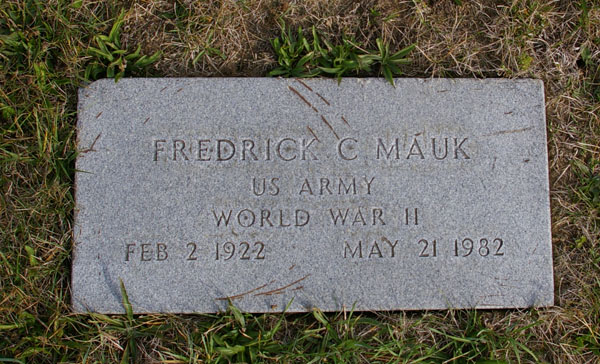 His service for our freedom will never be forgotten.