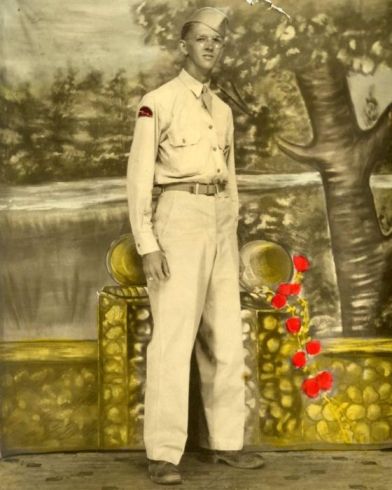 Guy Irvine Wetherell was born on October 8th, 1922, in Pickerington, Ohio.
He had worked as an aircraft mechanic since graduating high school. Guy was drafted and entered service on March 16th, 1943 at Fort Hayes in Columbus, Ohio. He was surprised when he was sent to basic training with the 78th “Lightning” Division, instead of becoming a member of the Army Air Corps.

During basic training he played for the 310th Infantry Regiment’s basketball team, was a boxer for his companies boxing team, and made squad leader before being busted back down to private when he punched a mess cook one day for mouthing off.

In May 1944, he was sent as a replacement to the 9th Infantry Division for the coming invasion of Normandy and ended up in the 60th Infantry Regiment, Company I. Bitter until the end of his life that the Army had broken up the men he had trained with for over a year, he was now a green soldier among several combat experienced veterans. Private Wetherell landed in Normandy on June 10th, 1944, and fought his way across the Cotentin Peninsula with the 9th Infantry Division. He most likely was with Staff Sergeant Edward Withers of Company I some days later when the company was pinned down by several German pillbox and machine gun fortifications on the western side of the Peninsula.  Staff Sergeant Withers attacked, knocking out four enemy emplacements and receiving the Silver Star for his heroic actions.  He was killed later in July by German artillery.

One of the only (and best) stories Private Wetherell ever told his grandson (also named Guy) who provided this text, happened in Normandy. One day, probably in early July 1944, some of the men in his unit became separated from the rest. His platoon leader told him to go and try to find them. Private Wetherell took off, trying to keep low, making his way through the Bocage (hedgerow) country, when he heard a metallic-clicking sound. He turned to see a German pointing a machine gun at him, and as he turned to run, the German opened fire, kicking up the dirt just behind him.  He dove over a hedgerow and landed right in the middle of a bunch of scared soldiers that pointed their weapons at him.  He yelled, “Don’t shoot! I’m an American!”  The soldiers turned out to be the very men from his platoon he had been sent to find.

On July 18th, 1944, Private Wetherell, having taken up a position behind a hedgerow near the Periers-St. Lo Highway, never heard the shell that wounded him. He had been knocked backwards and felt a sudden pain in his left knee. An 88mm shell had wounded him, another man, and killed a friend of theirs. According to Wetherell’s medical history, he was wounded in action by a “penetrating wound of the lateral aspect of the left knee.” A Lieutenant J. E. Roundtree wrote that “at 1300 hours, 18 July 44, soldier was injured by shrapnel from a mortar shell. He received penetrating wound left knee & chip fracture.”  Private Wetherell was given morphine and taken to the 128th Evacuation Hospital in Boutteville, before being sent to another hospital in England.  Guy continued to worry that he had not received the “million dollar wound,” and would be eligible to go back into combat. But after guarding troop trains in Germany towards the end of the war, he spent a good deal of 1945 recuperating in the hospital after his leg wound flared up again. In time he would come to know how lucky he was to have been wounded relatively early in his combat experience. In the coming months, the 9th Infantry Division would be devastated by continual combat, especially in the Hurtgen Forest.

Guy Wetherell returned home, married his love Christina, and had two daughters, Gaye, and Linda.  He worked as a Treasury Agent with the IRS, part of their “Strike Force,” that went after mobsters and others not paying their taxes, even working for a time in Las Vegas when it was still a relatively new city in the desert. He rarely ever spoke about the war, and only ever did with Guy, his eldest grandchild, but only when he asked him about it. He never mentioned the names of his friends from the 9th Infantry Division but just before his death, on August 5th, 1999, when he and his daughter Linda watched the movie ‘Saving Private Ryan’, it must have brought many memories back, for he broke down and cried.

The actions of Private Guy Wetherell will never be forgotten.

Guy Wetherell’s grandson Guy Nasuti has a wonderful blog about Americans in WWII as well, and wrote a great article about his grandfather:
http://americansinwwii.wordpress.com/
http://www.militaryhistoryonline.com/wwii/articles/storyofagodevil.aspx