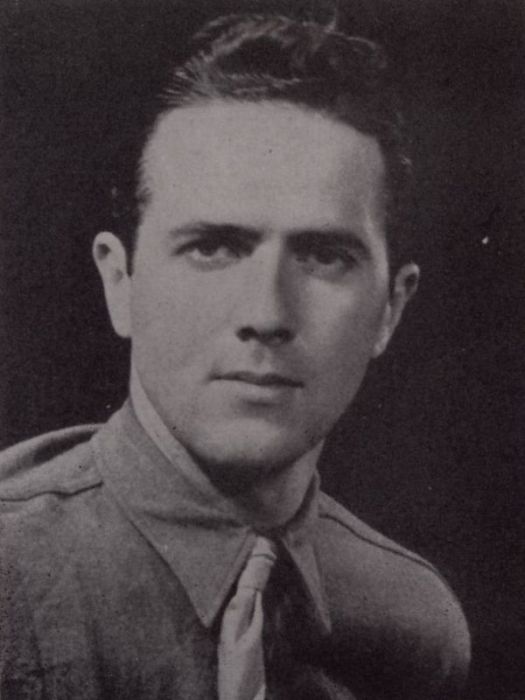 Guy Remington was born in Paris on August 6th, 1912 as Guy deZerman. His parents were Count Silvio and Countess Ruth. Guy’s mother’s maiden name was Ruth Willits deZerman, and she later married a St. Paul’s School graduate named Frederick Remington, Form of 1881, who became Guy’s stepfather and later adopted him. Frederick Remington was descended from the famous Remington family, who invented the typewriter, the cash register and the Remington rifle which was supplied to France in WWI.

For several years, Guy was living in Italy. We can assume he lived in Turin, as one of his two sisters,  Maria Vittoria Gioia de Zerman, was born there on March 28th, 1917. Guy lived in Italy until he emigrated to the USA. Leaving from Le Havre in France, Guy arrived in New York on March 25th, 1923. Believed is that he was in Canada as well in 1926, but returned to the United States.

Remington was a student at the St. Paul’s School in Concord, New Hampshire for one year between 1928 and 1929. The St. Paul’s School was founded in 1856 and had many alumni fighting in wars from the Civil War up to the present. Therefore there are memorials all over the school to honor the war dead. In WWII there were 104 St. Paul’s alumni who lost their lives in the war. The main memorial to them is a large auditorium which is called “Memorial Hall“, dedicated in 1951.
In the lobby of Memorial Hall is a large plaque with the names of the 104 alumni who died in WWII, including Guy Remington.

Close up of Guy Remington’s name on the St. Paul’s School Memorial Plaque.

Leaving the St. Paul’s School in 1929, Guy Remington studied first at the Gunnery School at Washington, Connecticut and then at the Valley Ranch School in Wyoming, from which he graduated. After working first in a lumber camp and later on a horse ranch out west, he returned to New York, wrote a novel, and then tried his hand at various jobs, principally journalism and advertising.

In 1941, Remington was 29 years old and had been working three years for the advertising firm of Young and Rubicam in New York. He wanted to fight. The Paratroopers would not take him because he was too tall, 6 ft., 4 inches, and because he had a slight defect in one eye. The Marines would not take him either.

Guy finally got into the Army and after a year’s training he went overseas with the 26th Field Artillery Battalion of the 9th Infantry Division in time to take part in the North African invasion. In the Tunisian campaign, he was in the thick of the action at  and “demonstrated outstanding ability to command in actual combat” as stated in his battlefield appointment to a 2nd lieutenancy, 20 September, 1943. Before he got his promotion, however, he had taken part in the invasion of Sicily and he was still a gun sergeant when he was awarded the Silver Star for his gallantry in carrying telephone and wire to a valuable but highly exposed point of observation and for staying there two days under severe enemy artillery shelling to maintain communications.

After the Sicilian campaign, Remington was sent to England to prepare for the Normandy invasion. In England they needed more paratroopers. The Airborne needed extra Artillery forward observers specially trained to adjust Naval gunfire for Operation Overlord. It was this program that Remington volunteered for. This assignment to the Airborne was to be temporary. Remington volunteered and was accepted. In addition to parachute training they also trained with the Navy for communications and gunfire adjustment. The training had to be carried on at night, on account of the Luftwaffe, and had to be given in about a quarter of the time ordinarily devoted to it.

In Normandy, just hours before D-Day began, as part of the 501st Parachute Infantry Regiment, 101st Airborne Division, Remington parachuted down through heavy machine-gun fire that tore his canopy and made seven bullet holes in his uniform, without wounding him. He landed in a little garden at the back of a German barracks. Remington threw a hand-grenade, scaled a high wall, escaped in the dark by way of a canal, rejoined his post, and fought eight days behind the German lines before he and his unit were relieved by American sea-borne troops. Remington wrote about his experience as a paratrooper as well: 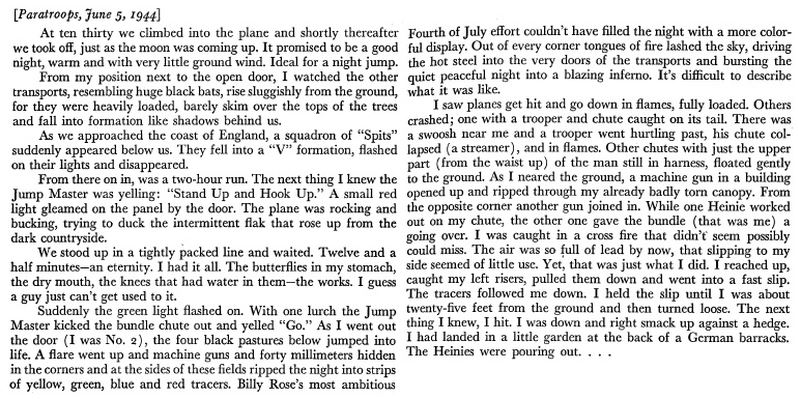 Guy Remington’s recollection of his jump into Normandy with the 501st Parachute Infantry Regiment.

Guy only served with the Paratroopers for a short period before he returned to his beloved 26th Field Artillery Battalion where he served as a Forward Observer through the Cherbourg campaign and through the fast-moving advance across France and Belgium.

Into the Hurtgen Forest with the 9th Infantry Division.

In Germany his unit took part in the fierce fighting in the Hurtgen Forest. The 26th Field Artillery Battalion set up positions near the town of Zweifall in September 1944 and provided artillery support to the advancing infantrymen from here. On October 13, 1944, he was, to quote from a letter from his commanding officer,”. . . with a forward platoon of infantry when it was surrounded by a surprise attack of the enemy. He and his party were immediately under fire. He ordered his men to withdraw while he, without regard to his own danger, tried to recover his radio, to prevent it from falling into enemy hands and thereby compromising the entire radio net of his battalion. Although he could not reach the radio, he was successful in destroying it by firing into it with his pistol. In so doing, enemy machine gun bullets riddled his body, taking Guy’s life.” According to his hospital file he died of a bullet wound to his head.

The Field Artillery S-3 Journal mentions his name in the October 14th, 1944 entry.

His service with the 9th Infantry Division awarded him the Silver Star Medal and the Purple Heart medal.

Tuesday 31st October 1944 Article in The Brooklyn Daily Eagle, New York. It wrongly states that Guy was KIA while being an Airborne trooper.

At first he was buried at the temporary Henri-Chapelle American Cemetery in Belgium. This temporary cemetery was established on February 8th, 1945, but was designated a permanent cemetery after the war ended. Guy was first buried in block M, Row 2, in Grave 38.

Guy was later re-buried to Plot A, Row 15, Grave 43, where he still rests today. 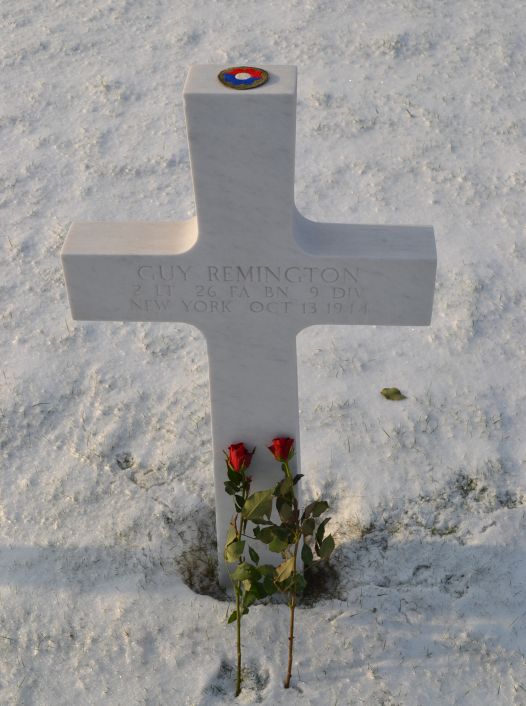 Adoption of Remington’s Grave.
Through my research I got in touch with my friend Claude Berghorn. His father, Emery Berghorn, also served with the 26th Field Artillery Battalion. It was through the stories of Claude that I became aware of 2nd Lt. Guy Remington. As Claude’s father knew Guy, I felt an emotional attachment, and I decided to adopt the grave of Remington. In September 2013 I received the official adoption certificate, and I visit 2nd Lt Remington’s grave as much as possible.

The official Certificate of Adoption.

One of the highlights of one of these trips was in April 2015. I got to bring my daughter Nora to the cemetery and had her place a flower on his resting spot. For me, this was a highly emotional event. Everything Guy Remington fought for, my freedom, the freedom of my daughter, came together that afternoon. We are free to travel and enjoy our freedom, and we traveled to see Guy’s last resting place. My daughter Nora placed the flower, and then kissed the marble stone of the grave. A heartfelt thank you for everything he has done for our freedom. I will keep looking for more information about Guy Remington, and hope to find relatives of him someday that will be able to tell me more about his short life. I will always remember him, and will make sure he will never be forgotten.

My daughter Nora and myself at the grave of 2nd Lt. Guy Remington. We will never forget him.

May 2nd Lt. Guy Remington rest in peace, and his actions never be forgotten.

UPDATE: After a 6 years search, I was able to locate family of Guy Remington. We met up in Germany in October 2019. I took, Jill, her son Rafiki and her father Jordan to the Hurtgen forest area where Guy was most likely killed in action. After this moving experience, we all went to the American Cemetery, where I was finally able to bring family members to Guy. This was something I always told him I would do one day, whenever I visited his grave. I wrote a short poem which I read out loud, and we all reflected on our freedom, and this sacrifice that Guy made for our freedom. It was a very special day.

Jill and Jordan at Guy’s grave.

It was a moving experience we shared together.

Also, I would like to give a tremendous thank you to David Levesque at the St. Paul’s School. He gave me all the information I was looking for. His kindness really helped me in my search to get to know Guy Remington a bit better. He provided some pictures as well, all used with permission, courtesy of the St. Paul’s School Archives.
Also a thank you to Monty McDaniel who provided the temporary interment card.