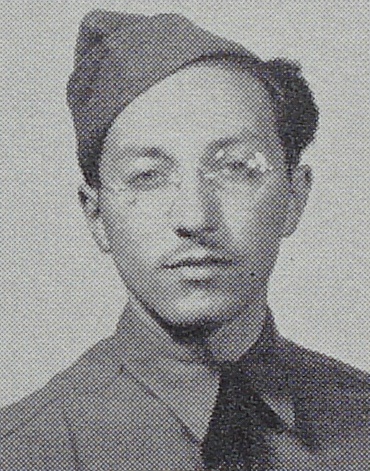 Jack Kopman was born in Brooklyn, New York on 3 December 1917.

He enlisted in 1941 and trained at Fort Bragg.

The 60th Infantry Regiment under command of Colonel Jesse L. Gibney, was to secure the objectives that adjoined the east bank of the Taute river. Attacking on 12 July, the 60th Infantry met little opposition. While the 24th Reconnaissance Squadron of Colonel Biddle’s 113th Cavalry Group blocked the town of Tribehou on the northeast, the 60th bypassed it. Patrols found the northern portion of the Bois du Hommet unoccupied, and after an artillery preparation fired by eight battalions, the regiment moved through the forest in force against light resistance.

Another artillery preparation that evening preceded an infantry move into Vincenterie, which was occupied by midnight. The reconnaissance squadron cleared Tribehou of weak forces on the following day, 13 July.

He lined the four infantry regiments abreast along an east-west line between Vincenterie and Le Desert with the intention of driving quickly across the four miles to the objective. As the attack began, the major problems became evident. An excessively broad front, terrain that canalized offensive action, an infinite number of hedgerows, and an enemy who infiltrated in stubborn groups.

All three battalions of the 60th Infantry fought hard and bitter all day and through the night of the 14th of July against enemy troops that cut wire communications between the battalions and the regimental headquarters. It was during these attacks that Sgt. Kopman lost his life.

A German company with captured Sherman tanks boldly approached a 47th Infantry roadblock and shot up the outpost. Mines, earth and log obstructions, wrecked vehicles, and debris impeded the division attack. The Germans blew craters in roadbeds and felled trees across the narrow country lanes. While the engineers devoted the bulk of their efforts to keeping the channels of communication and advance open, operations became “a succession of difficult frontal attacks from hedgerow to hedgerow.”

By the end of 15 July, after six days of combat, even the seasoned and battle-trained 9th Infantry Division had advanced scarcely six miles. The battles were though.

We will never forget the ultimate sacrifice that Sgt. Kopman gave in order for millions to live in freedom again.