Jacob Whitley Givens was born in Butler County in Ohio on April 26th, 1914. He attended grammar school and then worked in the manufacturing industry.
Before the war, Jacob also got married.

He entered Service from Fort Thomas in Newport, Kentucky on the 24th of March 1944. After this he was assigned to K Company, 3rd Battalion of the 60th Infantry Regiment, part of the 9th Infantry Division.

As he arrived in the European Theater of Operations, he found himself and his unit in the middle of the Hurtgen Forest where a brutal battle was being fought since September 1944. K Company was part of the October push towards the town of Germeter. After days of heavy fighting, they set up a defensive position east of the main B399 Monschau – Duren road. From here the mission was to advance down south towards the town of Monschau. However, K Company kept their defensive positions along the road for a couple of days between October 15th and 23rd, 1944. During these days, several heavy artillery barrages were dropped on the men, and occasional counter attacks were received. It was on October 20th, 1944 that Private Jacob W. Givens went Missing In Action. One year later on October 21st, 1945, Private Givens was officially reported Missing in Action.

Private Givens’ name is mentioned on the Wall of Missing at the US Cemetery in Margraten, The Netherlands.

Private Jacob W. Givens on the Wall of Missing, Margraten, Netherlands. Picture by Kristof de Geyter, who has adopted the name.

In the USA there is an empty tomb for Jacob as well. It is located at the Machpelah Cemetery in Mount Sterling, Montgomery County, Kentucky. 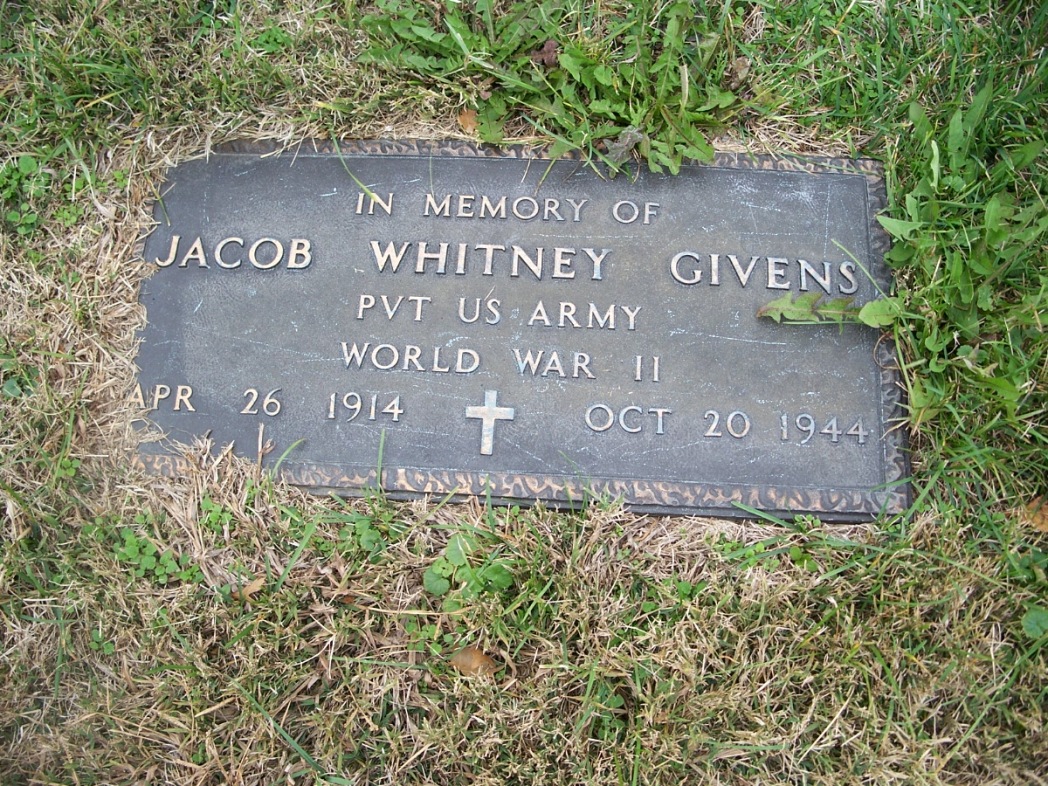 After the war, the American Graves Registration Command extensively searched the Hürtgen Forest for him. No remains found in the area were identified as Givens, and the Army declared him non-recoverable.

While studying unresolved American losses in and unidentified remains recovered from the Hürtgen Forest, DPAA personnel analyzed historical documentation regarding X-5483 Neuville, a set of unidentified remains recovered on May 15, 1947 from District #20C of the Hürtgen Forest by the AGRC. The remains had originally been found by a German woodcutter who later led an AGRC team to the site. The AGRC team found the remains lying on the ground, surrounded by U.S. Army infantry equipment. The remains, designated X-5483, could not be identified, and were interred at the United States Military Cemetery Neuville (present day Ardennes American Cemetery).

Based upon the original recovery location of X-5483, a DPAA historian determined that there was a likely association between the remains and Givens. In June 2018, the Department of Defense and American Battle Monuments Commission disinterred X-5483 and accessioned the remains to the DPAA laboratory for identification.

Jacob Givens’ name is recorded on the Tablets of the Missing at the Netherlands American Cemetery, an American Battle Monuments Commission site in Margraten, Netherlands, along with the others missing from WWII. Although interred as an Unknown, Givens’ grave was meticulously cared for by ABMC for 70 years. A rosette will be placed next to his name to indicate he has been accounted for.*.

*Taken from the official press release by DPAA.

Jacob Givens will be returning to the USA and will be buried Nov. 9, 2019, in Prestonburg, Kentucky. Another Missing In Action soldier is going home.

I would like to give a special thank you to Kristof de Geyter, who has adopted the grave of Jacob W. Givens for allowing me to use some of his pictures. Please visit his tribute page to Private Givens as well.

Other sources: www.findagrave.com and www.adoptiegraven-database.nl.