About this article:
During my research to the 9th Infantry Division, I came in contact with Michael Fraticelli. Michael has spent many years doing extensive research, interviewing veterans, collecting footage, pictures and other rare and valuable documents to create a unique document about the events in North Africa in the form of a documentary film. I have a lot of respect for all the efforts Michael has been doing all these years, and consider him a true inspiration in my research as well. Michael has been very supportive of my book and website project too, and I can’t thank him enough for this. He has been very kind to me, and helped me to some very valuable information and contacts. I am very excited about his documentary film project and wanted to let more people know about it through this article. This is one great example of dedication to research.

When I asked about this great project, Michael was kind enough to write down some information about it for the website:

Project description:
This documentary film effort, (not a comprehensive history), should be viewed as our ‘last chance’ to see and hear from some of the oldest veterans of the North African campaign 1942-43. The inspiration was derived from a personal journal written by my father, Anthony L. Fraticelli, (coxswain LCV), which carried raw recruits of the 39th R.C.T. 9th Infantry Division into Algiers November 7th 1942. With an initial focus on the 9th, the scope has expanded to include other veterans of: US Navy, Coast Guard, Army Air Corps, Army Nurse Corps, US Army First Division, Afrika-Korps, civilians, historians, sons and daughters.

Outlook and audience:
Unfortunately, fewer and fewer people are interested in the actual history of WWII. Fiction ‘sells’ as an integral part of society today. I knew the audience for a serious documentary based on ‘real stories’ with living veterans might be comparatively small. In order to widen the appeal, I devoted time and personal savings on re-creations based on actual testimony. In addition, great effort has been spent on searching out hundreds of hours of obscure archival footage, photos and documents which compliment the evolving story line. Much of the archival material comes from NARA II in College Park MD. Since 2006, I’ve spent many weeks/months of research. 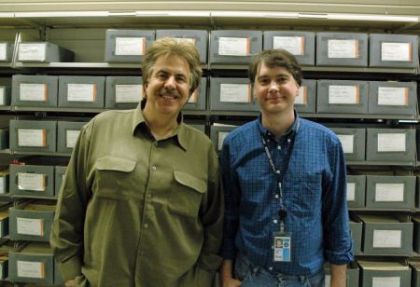 Mike (left) with friend and staff member James. Picture taken in 2006. In the 6 years Mike has been visiting NARA, he’s developed valuable friendships with several staff members and other independent researchers.

Mike (left) pictured again with his friend and staff member James in 2012.

Required work and production difficulties:
Beginning in 2007, production on re-creations was plagued with problematic technical support.
I realized I’d have to ‘re-shoot’ some of the scenes myself. That’s when I also put a priority on searching for additional veterans relevant to the story as time was running out. But when you don’t have a budget, or staff of historians, it’s difficult to understand the commitment required to take on such a Herculean task. The accepted doctrine regarding financing is to ‘never use your own money’. Had I followed this path, there would never be a project, the veterans would have vanished. Aside from small donations, there’s never been any substantial funding. My strongest supporter has always been my sister. Other family members are also helpful, and the reenactors are the backbone of the re-creations. Several individuals have been very supportive; Leilani Goode, Kurt Eberling Jr. and Matt Carroll.

Traveling across this country with a trip to Germany, it became apparent; I was the only person who could personalize the approach when I met the veterans. The situation grew dire as it became a race against time reaching out to these men. One last ‘Saving Grace’ was a donation from Larry O’Conner Sr. of Other World Computing. His company’s gracious support, made my last 2200 mile road trip possible.

The emotional cost:
Behind the scenes also brings an emotional cost of building trust with the veterans, sometimes becoming part of their family only having to face their eventual passing. To date I’ve acquired more than 50 interviews with American veterans including 5 surviving Afrika-Korps. More than half have since passed.

The re-creations – getting it right:
I inevitably had to settle for a few select staff with the absolute necessity of having to take on multiple tasks including everything from; Editing, Musical Composition, Director of Photography, Casting, Costuming, Set Construction, and more. I gradually obtained enough equipment to be self-sustained. 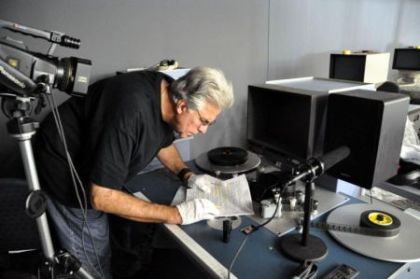 Michael has spent hours and hours of going through archival footage, collecting and editing the material. The result will be the very well researched documentary “North Africa 1942 – 1943 Survivors’ Stories”.

Production goal:
Known to few except those in the industry, it’s almost impossible to tackle something like this alone. With little interest, funding, or reliable help, there is no other option. I stand resolute in this commitment; this is my legacy to these men. I will see this through.- Mike Fraticelli