Samuel grew up in Queens New York, being the oldest of three sons of Russian immigrant parents.  He was attending City College New York night school, and working as an insurance agent & accountant when he was drafted on the 11th of March of 1942.  After basic training he was assigned to the 305th Infantry Regiment, 77th Infantry Division., at Ft. Jackson in South Carolina. Applying to OCS (Officer Candidate School), he was accepted into class 112 at Fort Benning, Georgia, graduating as a 2nd Lieutenant on 27th of November 1942.

The first assignment for him was as a 2nd Lt. with the 1st Battalion, 354 Infantry Regiment, 89th Infantry Division at Ft. Carson, Colorado.  In May of 1943 he was promoted to 1st. Lt., and made the S-4 (Supply and Logistics) for the 1st Battalion of the 89th Infantry Division. While in that position, 1st Lt. Weinstein requested assignment to a combat unit overseas, and on the 11th of August 1944, he shipped out to the ETO (European Theater of Operations) as a replacement officer, arriving at Omaha Beach on the 25th of August, 1944.

On September 16th 1944, he was made the platoon leader for the 1st Platoon, Company C of the 60th Infantry Regiment in the 9th Infantry Division. It did not take long for Samuel to get right into the action. A few days earlier, on the 14th of September, the 60th Infantry Regiment had been on line outside of the Hurtgen Forest since the 12th of September 1944. They had been in sporadic but continuous action prior to moving into the Monschau Corridor, and became sitting ducks for the many German soldiers entrenched in pillboxes defending the Hofen – Alzen Ridge and alongside the Corridor. On the 16th of September 1944, progression up the ridge was stalled by all units due to the overwhelming firepower and location of the German’s. The Regimental Companies fighting in this area had been seesawing back and forth for the town and objective of Alzen from the 14th of September. Samuel Weinstein and his men joined these battles for the Hofen – Alzen ridge area on September 18th. Difficult to maintain possession of the town the fights moved back and forth, and it took several Companies to take the town once more. By 1400 hours on the 18th of September, the men of the 60th Regiment had secured their objective and captured Alzen. The next day they were moving toward the village of Monschau where they mounted trucks for a motor march to the Zweifall vicinity in and around the the Hurtgen Forest area.  On the 20th of September, in a driving rain, they were in a foot battle that begun at 1300 hours.  Due to the extremely bad weather, units became lost and disorganized and eventually had to retract their steps back to the original line of departure.

1st Platoon of C Company, 60th Infantry Regiment was sent south toward Schalts on the West of the battalion zone of action. 1st Lt. Weinstein’s Platoon reached the objective with little difficulty, but the other Platoons as well as units from B Company met heavy resistance.  Under heavy enemy attack it was determined that the enemy force facing the company was too large for them to hold their position and additional units from the 3rd Battalion, 60th Infantry Regiment were ordered to assist. For the next two days the enemy continued to attack and shell the Regimental positions.  It was during this shelling that 1st. Lt. Weinstein was wounded by shrapnel on 26 September and evacuated to a field hospital.

Lt. Weinstein was evacuated back to the United States on April 1st, 1945, officially discharged on the 24th of October in 1946, and assigned to the 156th Organized Reserve Infantry Group in Queens New York.  He was promoted to Captain on the 14th of  March 1946.  He held various assignments with the Organized Reserve until his discharge from the Army of the United States on October 26th, 1951.

Captain Samuel Weinstein’s decorations and patches of the various units he served in.

The actions of Captain Samuel Weinstein will never be forgotten.

The return of Lt. Weinstein’s US Army WWII footlocker

US Army WWII footlocker found in Canada
Last month, at the beginning of July 2020, I received a very kind email from Darin Victor, a man who is living in Canada. He mentioned to me that about 25 years ago he had bought an original US Army World War II Footlocker. Being a history and WWII buff, he had purchased the locker not for himself but because he couldn’t bear the thought of somebody else buying it and painting over it to make a decorative piece. It survived the war and made it back to the United States and then somehow made its way to Canada.  Darin Victor, the kind man contacting me, said it would break his heart to think that it would be the end of the line for the footlocker right then and there. He bought it and stowed it away just to preserve it.

When recently he was moving some things around in his garage, he came upon it again and decided to look for some more information on the name via a Google search once more. And sure enough, by now there was this Tribute Page and Darin was delighted to find the research and specific information about Lt. Weinstein. The case had Samuel H. Weinstein’s name and Army Serial Number stenciled on it, so it was easy to match and verify.

Reuniting the footlocker
After receiving this email, I forwarded it straight away to Samuel’s son, Jay, who by now has become a good friend of mine over the years. He was equally delighted to hear about his father’s footlocker, and got in touch with Darin in Canada. I soon heard that the footlocker was mailed, on its way to Jay! I felt very excited about this.

During the first week of August 2020, Jay has been reunited with this great historical piece that once belonged to his father, and used to have his father’s Army stuff and personal belongings in it. Sometimes history becomes so real again, that it can be touched. Here are a few pictures of the well preserved footlocker. 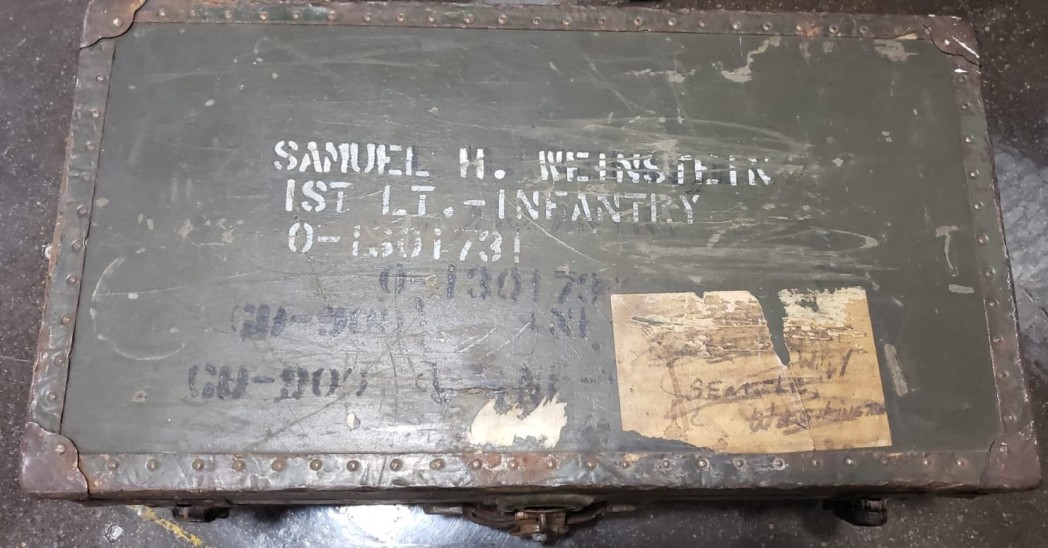 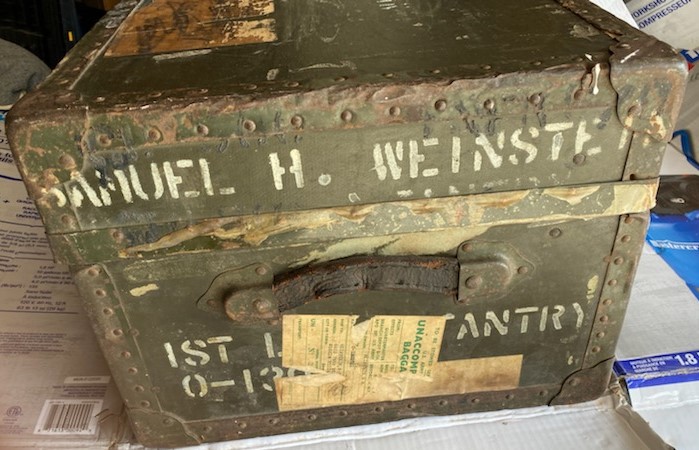 I am very happy for Jay and his family to have the Footlocker in his possession now.

A big thank you to Darin Victor, who bought the footlocker all those years ago and thought about it enough to preserve this great piece of 9th Infantry Division history!