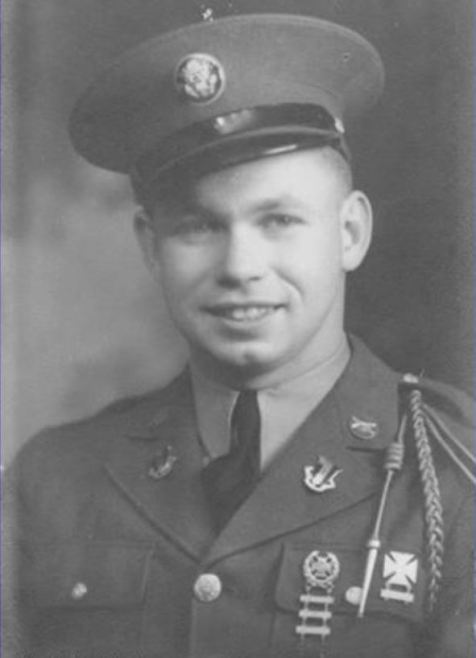 Wallace “Wally” Edward Burr was the son of Wallace C. and Martha Burr. He was born on December 11, 1917 in a small village Ilion in New York and raised in a small city, Gloversville, in Upstate New York*.

The family moved to Gloversville when Wally was a young boy. He had a younger sister, Genevieve Burr. He lived in the same house, 19 Fourth Avenue, until he was married in 1948. Wallace went by the name “Wally” for his entire life. He graduated from Gloversville High School and attended the North Main Street Methodist Church, also in Gloversville.

His date of entrance upon active duty was January 8, 1941 (Age 23).  He was in the US Army, serving in Easy Company, 2nd Battalion, 60th Infantry Regiment in the 9th Infantry Division. With this unit, Wally served 33 months overseas. He fought in the North – African Campaign (Algeria; French Morocco, Tunisia) and in Sicily, before going to England for training for the Normandy Invasion. Four days after D-Day, on June 10th, 1944, he landed in Normandy where he came ashore at Utah Beach and fought in the Central Europe Campaigns in France, Belgium and Germany. He was transferred to Company G on January 23, 1945. Wally returned to the United States and his date of separation from the Army was October 10, 1945. (Honorably Discharged – Demobilization).

In the more than 400 letters that he wrote to his mom, dad and sister, he was more concerned about his family back home than he was about himself.  He always ended his letters with “Don’t worry about anything because I am getting along fine.” He was a devoted son and sent almost all of his money home except for a small amount of spending money he would save for himself.

Wally was employed by McConnell Motors in Gloversville, New York before he went in service.  He joined the Army and reported for active duty at Fort Dix, New Jersey on January 11, 1941. He transferred to Fort Bragg, North Carolina with a 19,5 hour train ride.  He trained there and was assigned to Company E (Easy) of the 60th Infantry Regiment, 9th Infantry Division. 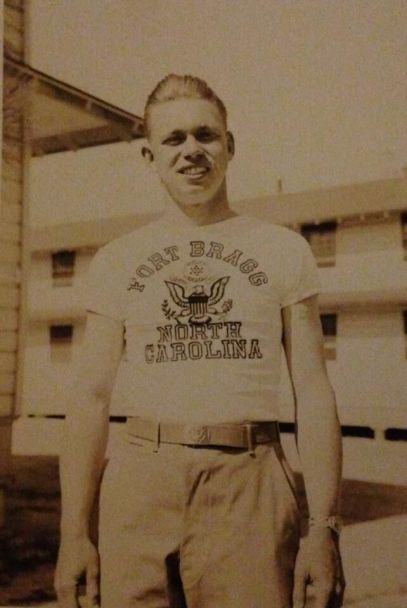 On October 18, 1942, Wally stated in his letter that all tents were taken down and they were “moving east.”  It is difficult to imagine how he felt sailing to North Africa not being exactly sure where he was going. In his November 13th letter, he stated “I am in Africa safe and sound.” The 9th Division had such fierce fighting in 3 previous campaigns before D-Day, it was decided that the 9th would not land on the beaches on D-Day but on D-Day +4, on June 10th so that their expertise of previous combat could be put to use to clean up the previous battles and to play a big part in the cutting off of the Contentin Peninsula.  The Ninth Division took Cherbourg and St. Lo, where Wally was interviewed on the radio and heard by friends in his hometown of Gloversville. From France he went through Belgium and went into Germany. Aftercrossing the Siegfried Line he took part in the heavy fighting in the Hurtgen Forest.

Wallace returned to Gloversville as a civilian and married Madeline Winona Menge on August 28, 1948. His best friend, Conrad, who also served in the 9th Infantry Division was Madeline’s cousin and introduced them once they returned back home. Wally and Conrad entered the Army together and were together almost until they were discharged.

Wally and Madeline were blessed with 2 daughters, Darlene and Valerie, a son Wallace G., six grandchildren (three he never got to know; only one grandson truly remembers him because of being older than the other two grandchildren).  Wally would be so proud of all his grandchildren, but especially proud of his youngest grandson who is in the Air Force. Jason Wallace Burr is a mechanic for the C-130 transport planes that fly to Antarctica. In one of Wally’s letters that he sent his family, he stated that maybe he should have been a military plane mechanic, this was something we learned recently from reading his letters. It is interesting that Jason’s military career is doing something that his grandpa considered doing in the Army.

After the war, Wally went back to work at the car garage that eventually became a Ford dealership. He worked as a parts manager at the same business for 40 years.

Wally was so very proud to be part of the “Old Reliables”, the US Army’s 9th Infantry Division. He and our family participated in the Worcester, Massachusetts reunions held at the Immaculate Conception Church. It brought Wally great joy to attend and walk in the annual parade. Father Connors was the pastor of the church and he and his congregation hosted an annual fall reunion. Father Connors was also the chaplain for the 9th Infantry Division during the invasions of Tunisia, Sicily, France and Belgium and Germany. These invasions cost the division 4,581 lives during the war.

Partly because of his pleading with military and church authorities, Father Connors was allowed to follow “his boys” into the front lines. That is where the legend of the chaplain’s “Coffee Shop”, his friendly mingling with enlisted men, his disregard for rank, his intense interest in “his boys” regardless of their religion and his heroism long outlived the war.  “Connors’ Coffee Shop” was a tradition among the troops of the 9th during any respite from battle. “Coffee was brewed in a big aluminum pitcher and heated on a ration-can stove with kerosene, the coffee was simply boiled and served. When the coffee ran low, Father Connors just added more grounds and water. We never dared get all the way down to the bottom of the pot. We were afraid of what we might find in it. There was a quarter-inch cake of coffee on the sides of it to add to the flavor and there were days when the men claimed they had to chew it…..it was too strong to drink.”

A veteran of the 9th, of the Greek Orthodox faith, recalled Father Connors as “a great chaplain”….”He was right down in front when it all counted.”  “He was one of the troops.” Father Connors once said to the soldiers of the 9th, “Dedicated to our own faith, praying together in a common purpose.” During the war, Father Connors became a close friend of General William C. Westmoreland, later Army Chief of Staff. In 1942 Westmoreland was the operations officer and later the executive officer of the 34th Field Artillery Battalion, the 9th Infantry Division and a battalion commander in the operations in Tunisia and Sicily. In 1944 was promoted to temporary Colonel and in July 1944 he was chief of staff of the 9th Infantry Division in the closing operations of World War II in Germany, where he also commanded the 60th Infantry Regiment during 1945–1946.

General Westmoreland attended a few of the reunions that our family attended.  When Father Connors returned to Worcester after the war, he yearned for a reunion with his 9th Division comrades. He launched a yearly tradition in his home parish, then St. Peter’s parish. The reunion and memorial mass were conceived to celebrate the living and honor the dead of the 9th Division. Father Connors was a dedicated spiritual inspiration and a very kind gentleman yet humorous.  He received a Silver Star, one of the nation’s highest honors for heroism for rescuing a soldier from “no man’s land” through a minefield that was considered suicidal to cross.

Wally and Madeline also enjoyed attending the Ninth Division reunions at the various cities around the country.  They especially cherished going to the Fayetteville reunion in 1982 with their daughter, Darlene, when the 9th Division Memorial was dedicated at Fort Bragg’s Main Post Parade Field near Fort Bragg’s eternal flame. 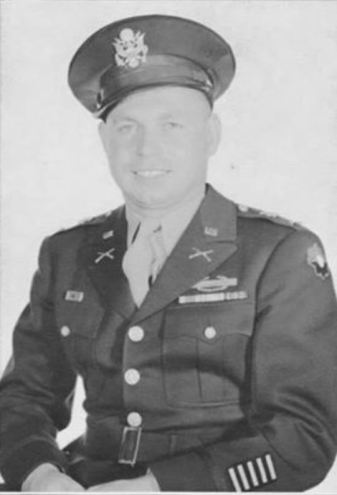 Wally died on June 18, 1986 at the age of 68 from cardiac arrest. Wally and Madeline were married 37 years.
Madeline was a widow for 29 years and passed away from Parkinson’s Disease at the age of 91, 3,5 weeks shy from her 92nd birthday.

After almost 30 years, they were reunited in Heaven for their 67th wedding anniversary.

We will never forget the actions and service of 2nd Lt. Wallace E. Burr, resulting in the freedom for many.

Thank you to Wally’s daughter Darlene for sharing all the information and writing most of this tribute text.

*Before Wallace was born, Ilion began to flourish starting around 1816 when Eliphalet Remington created his first rifle, which would later grow into the Remington Arms Company, “America’s oldest factory that still makes its original product – guns.”  It is the largest U.S. producer of shotguns and rifles. They have developed or adopted more cartridges than any other gun maker or ammunition manufacturer in the world. Remington rejected the use of his name as a name for the village in 1843 and it was eventually named Ilion, due to a misspelling or bad penmanship of Illium.