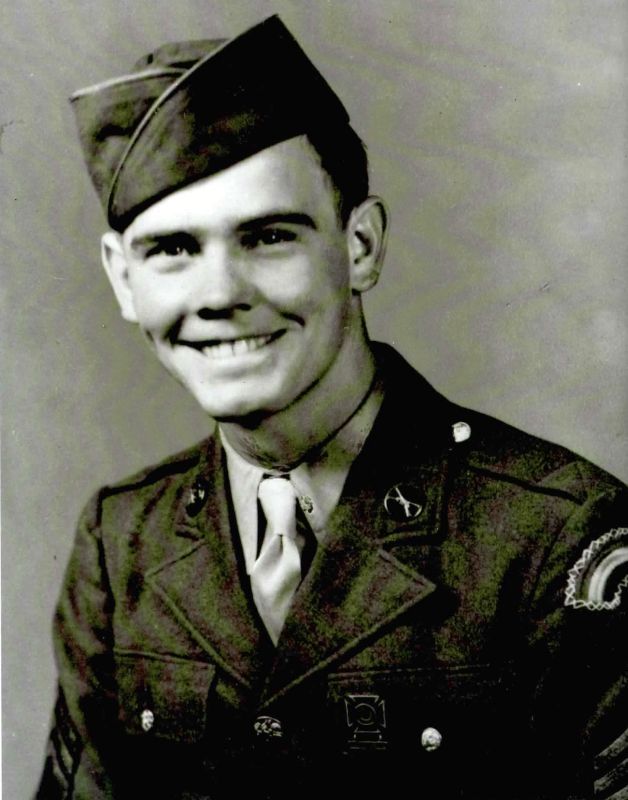 Raymond “Carlyle” Blanton was born on April 21st, 1925, in Richmond, Virginia.
Living there with his parents, he had 7 siblings. He was very close with his youngest sister Shirley. Carlyle had a happy smile, a twinkle in his eye and a selfless spirit. 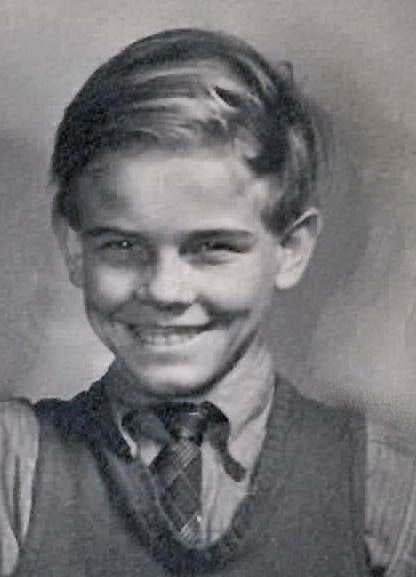 Raymond with a twinkle in his eyes at age 13.

He had a girlfriend with whom he rode horses. She was a member of The Catholic Church, and although he wasn’t, he went to church with her for over a year and converted to her religion while on the ship on his way to Europe. He planned to marry her in St. Benedicts Catholic Church when he would return from the war, but this was not to be. Carlyle also discovered a musical part in him: His mother taught him to play piano, and he was quite talented at it. He also had a very mischievous streak, always playing tricks on others in the family. Times have been hard during that period in the US, and Carlyle also did his share to help the family in difficult times. 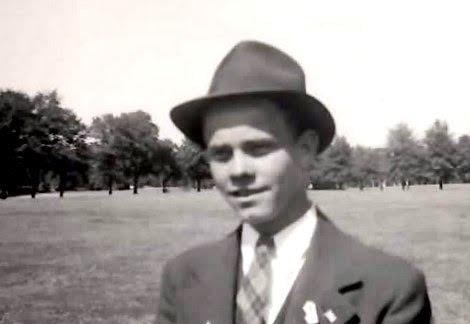 The last known picture of Raymond as a civilian.

Carlyle dropped out of school at 16 years of age to help to support his family.  He worked as an Oil Man, changing oil in military vehicles at the location of the Virginia Militia headquarters for 18 months before he joined the Militia. He gave all the money he earned in the VA Militia to his parents before being drafted at 18, excepting some change for his little sister, Shirley, whom he was very close with. The work at the militia was the precursor to the Virginia National Guard. He used to ride his bicycle to work, as can be seen on this picture  where Carlyle was only 14 years old. 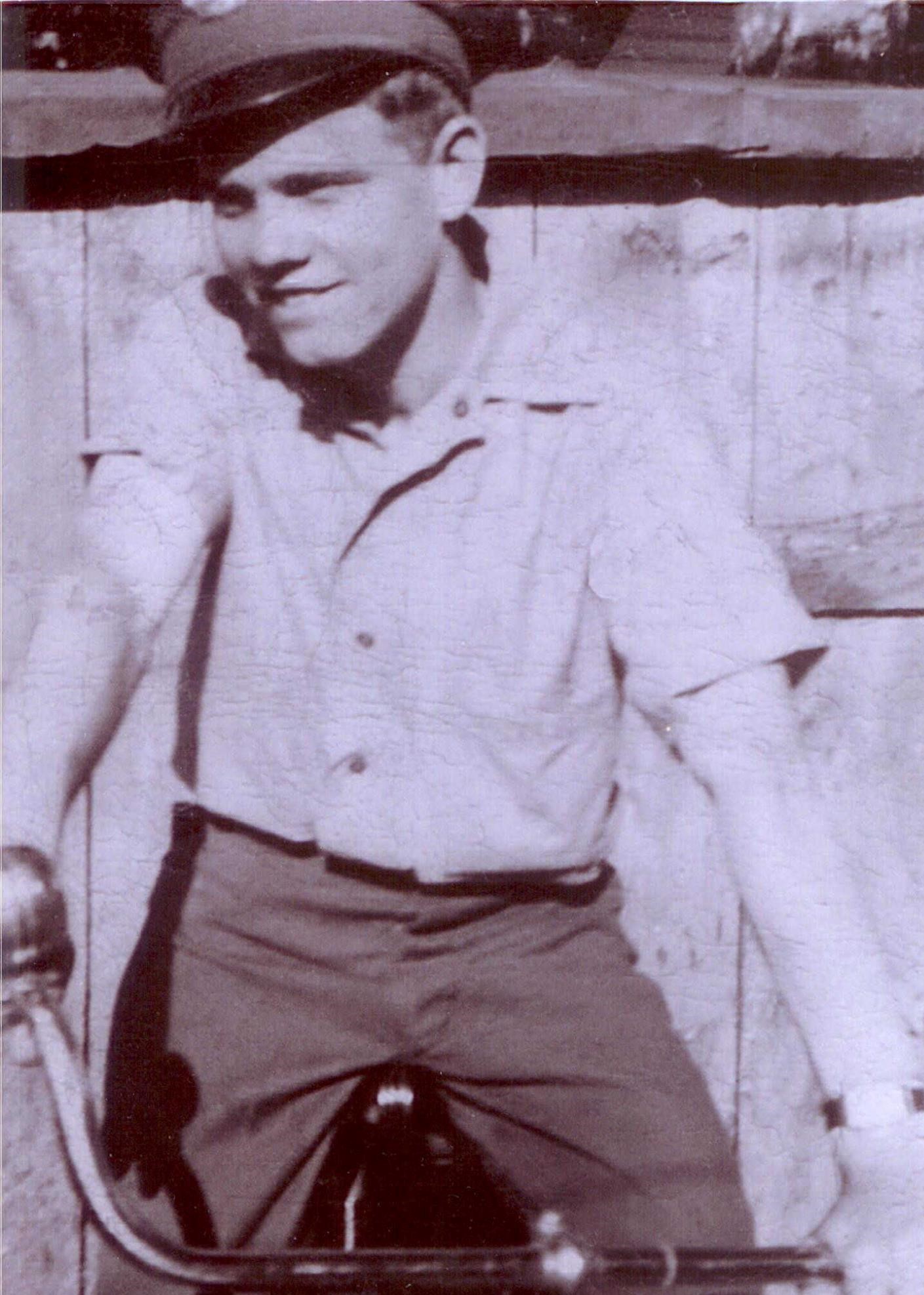 Carlye on his bike, aged 14

During the war, Carlyle told his mother about some of the guys trying to dodge the military draft by putting soap under their arms to elevate blood pressure, and with this, hoping to fail the tests. Carlyle didn’t want to do any of this, and told his family he was proud to go and serve his country. He was drafted in August 1943, and trained with the 232rd Infantry Regiment of the 42nd “Rainbow” Infantry Division at Camp Gruber in Oklahoma. Carlyle can be seen wearing the Rainbow Division Patch on his dress uniform on the photograph at the top. He earned a sharpshooter badge here, and was promoted to Staff Sergeant, and left the camp on August 4th, 1944.

Missing in Action in the Hurtgen Forest.
Carlyle was then reassigned as a replacement for the 60th Infantry Regiment in the 9th Infantry Division, 1st battalion, C Company. He arrived in England late August or early September. From there he fought in France, Belgium and Germany. It was during one of the battles in the Hurtgen Forest in Germany, that Carlyle was declared “Missing in Action” on the morning of October 14th, 1944.

The 60th Infantry Regiment was charged with the Germany Campaign beginning on September 15th, 1944. A second attack started on the 6th of October 1944. Early October 1944, the 60th Infantry Regiment was in a defensive position in an area called the Deadman’s Moor in the Hurtgen Forest, situated near Aachen, Monschau and Duren near the Belgium and German border. The Infantrymen held their positions and captured enemy territory. However, strong attacks persisted near the Raffelsbrand Junction. On October 13th, 1944, the 1st Battalion captured a pillbox (above ground bunkers), and moved their lines forward. Staff Sergeant Blanton and the men of C Company attempted to take a second pillbox but were met with very heavy resistance. They tried again the next day, the 14th. The German threw down a devastating barrage of artillery, mortar and machine gun fire. On October 14th, 1944, Staff Sergeant Blanton and thirty-tree men from C Company were declared “Missing in Action“ during this brutal fighting in the Hurtgen Forest.

The last time the family heard from Carlyle was via a letter that Carlyle wrote to his mom. Near the end he wrote these words:

The letter was dated October 5th, 1944, just one week before Carlyle went missing in action.

Four missing men.
The American Graves Registration Command of the European Zone investigated the area, and all missing men but four, were recovered. Raymond Carlyle Blanton’s remains were among the four that were not recovered, and he was declared Killed in Action on October 15th 1945. His remains were then declared “non recoverable” on December 20th, 1951. The other three men that were non recoverable were PFC Clarence W: Brotherton , PFC Leslie E. Shankles and Private Walter H. Reuter Jr.

Carlyle was awarded the Bronze Star and Purple-Heart, and memorialized on the “Wall of Missing” at the US Cemetery in Margraten, The Netherlands.

Raymond C. Blanton’s name on the Wall of Missing at the US Cemetery in Margraten, The Netherlands.

Research and recovery.
About 13 years ago, I got in touch with the niece of Carlyle, Mrs. Nancy Fraker. This wonderful woman was very dedicated in finding the remains of her beloved uncle. She had done some great research and provided me all the information on this page. Over the years we have become close friends and have a shared, strong connection through Carlyle. Several remains found in the same area where Carlyle went missing could never be identified, and these have been buried in several graves at the American Cemeteries as “Unknown Soldier”. We thought that it might be possible that one of these unidentified soldiers could be Carlyle. Research went on for years also with the help of the wonderful people from www.stichting-mia.nl.

I started to look into the events for the days before and on October 14th, 1944, the day Carlyle and the other 3 men went missing. I dove deep into archival documents and spent hours, days and weeks going through After Action Reports, Journals, Combat Interviews, notes, pictures, studied maps and overlays, German reports, and talked to local historians of the Hurtgen Forest Museum in Vossenack. I visited the area many times and mapped out what I think were the last known movements of the men when they went missing. I also studied IDPF documents of different sets of remains found in the area. I was able to cross out some of these, based on my knowledge of Carlyle’s height, body type, locations where they were found and the information in these reports. After a year of research, I narrowed my findings down to several sets of remains. I also had been able to get an overview of the events with a detailed timeline and known locations. DPAA became aware of my research and knowledge of the events and asked me to share my findings with their historian, and our information was compared. The conclusion was about the same, and it was felt that now there was enough evidence to disinter specific graves of unknown soldiers to perform DNA research on.

All the research and waiting slowly paid off. In July 2018, PFC Shankles was identified. In April 2020, PFC Brotherton was identified, and a day later, also in April 2020, we received the news that Staff Sergeant Blanton also had been identified.
Carlyle was going home again. 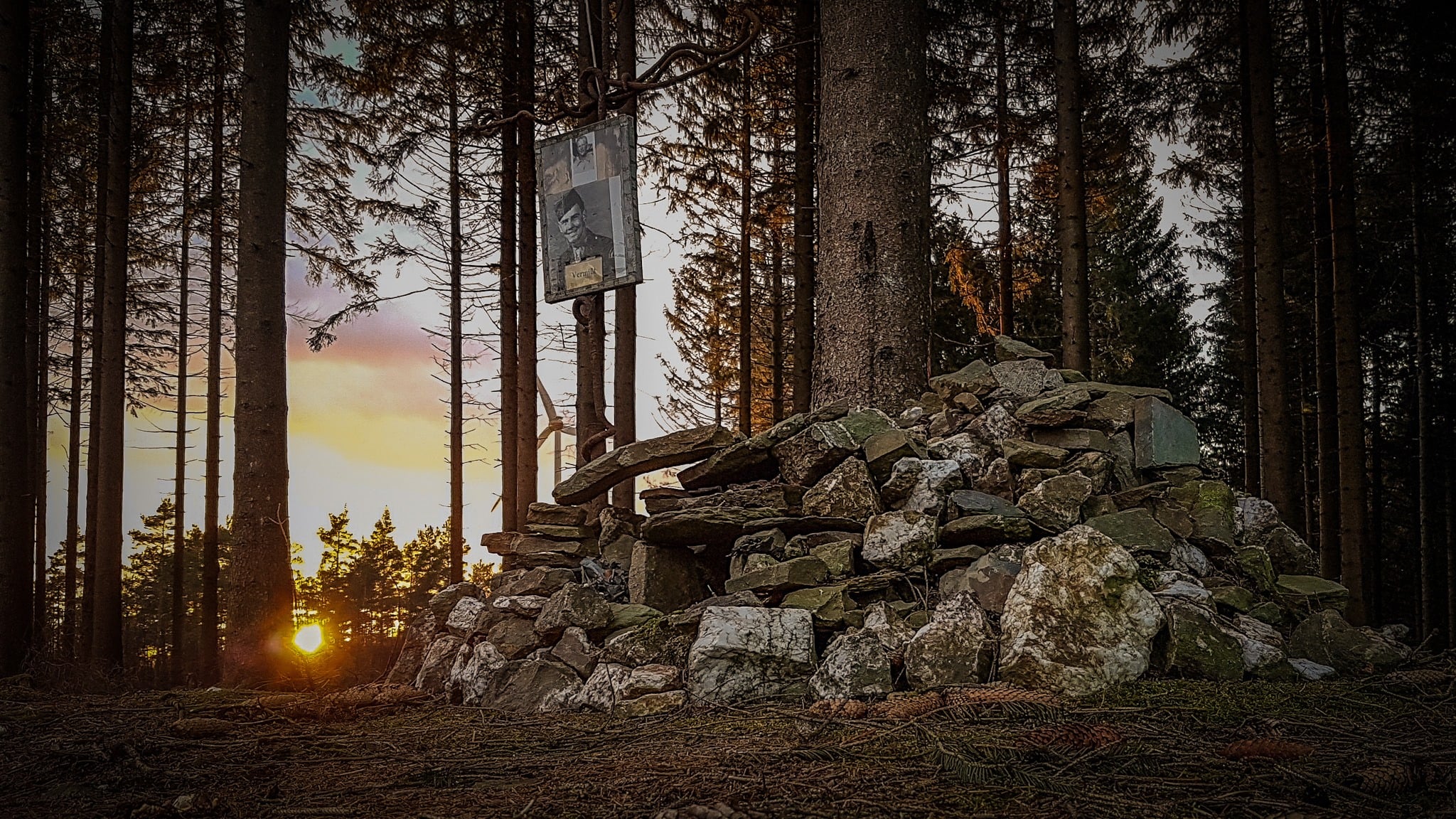 The Raffelsbrand area today.
When visiting the area where Carlyle and the other men of the 60th Infantry Regiment fought so hard during those October days in 1944, you can still find traces of battle. Even though the Hurtgen Forest is a peaceful area these days, it still feels very eerie to walk around there. The 9th Infantry Division lost thousands of men here. Many foxholes and craters can still be found. Parts of the bunkers that kept the men of the 9th Infantry Division from advancing are now silent witnesses to the terrible fights there. A few years ago, the name ID tags, called “dog tags” of Carlyle’s fellow soldier, Walter Reuter Jr. were found in the same area where Carlyle went missing. At the spot where the dog tags were found, remains of the old bunkers nearby were used to make an improvised memorial. During one of my visits I brought a picture of Carlyle and one of Walter with me, wrapped in plastic, and placed it on the memorial made out of rocks. We placed some flowers as well. Months later, someone we don’t know, made an iron cross made out of old poles used for barbed wire defenses during the war in the area. Slowly the monument was growing. My pictures got framed and pieces of shrapnel and other things found in the area were added. It has been wonderful to see the monument growing over the years. My dear friend Rolf has been taking great care of it all these years. It is a sign that these men have not been forgotten.

Sadly, a bark beetle disease has taken many trees in the area. Because of this, many trees had to be cut. The construction of windmill turbines also took away parts of the former battlefield.

Some items found in the area where Carlyle went missing. Parts of a M1 ammo clip and a M1936 suspenders or musette bag hook. Touchable pieces of history.

The different stages of the always growing memorial for Raymond Blanton and Walter Reuter Jr.

The story and picture of Carlyle made a very big impression on me. Ever since I heard about him, saw his name on the Wall of Missing at the US Cemetery in Margraten, and visited the area where he was last alive, I felt that I needed to do something special to make sure these men would never be forgotten. It resulted in the idea to write a book about the events of the 9th Infantry Division in the Hurtgen Forest. I feel strongly connected to this young man, who left everything behind to fight for our freedom, and he is one of my biggest inspirations in life. He surely will never be forgotten and I will forever remember and love Carlyle.

UPDATE: Raymond Carlyle Blanton has been identified and accounted for on April 23rd, 2020:
https://www.dpaa.mil/News-Stories/News-Releases/PressReleaseArticleView/Article/2167779/soldier-accounted-for-from-world-war-ii-blanton-r/

A moving tribute video of the area where Carlyle went missing was made by my friend Marcel Oepen.